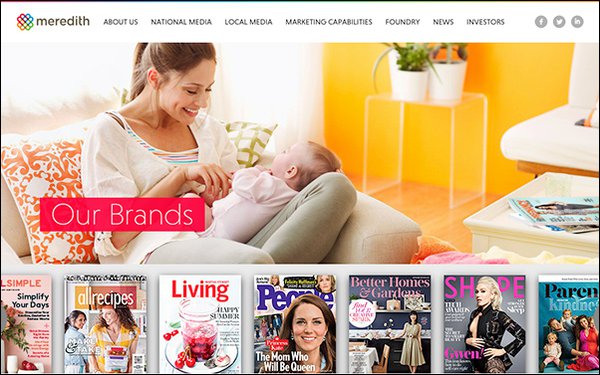 Meredith Corp released an updated response and plan to deal with the financial fallout from the COVID-19 pandemic today.

Meredith president-CEO Tom Harty reports the company has robust traffic to its digital properties — a 40% increase in April so far — high viewership across its local news broadcasts and steady paid print subscriptions. Meredith Corp’s National Media Group is home to its print and digital titles. The company stated "approximately 95% of all Meredith magazines are sold via subscriptions."

“Given recent lifestyle changes, our content is particularly relevant now as more Americans are spending time at home and are demonstrating expanded interest in DIY, food and entertainment, as well as local news programming,” stated Harty.

However, like most publishers, Meredith Corp is experiencing the impact of advertising campaign cancellations and delays. According to the company, advertising makes up about half of its total revenue.

To “strengthen our liquidity and enhance our financial flexibility in the near-term to effectively navigate the current environment,” Meredith Corp outlines some of the steps it’s taking to work proactively, including cost-control measures and salary reductions.

Pay reductions are accompanied by a salary and hiring freeze and a significant reduction in temporary and freelance employment. Because of efforts to diversify its revenue mix over the last decade, Meredith currently draws 45% of its revenue from consumer-driven sources, including subscriptions and renewals, brand licensing royalties, ecommerce revenue from direct sales and referrals and increased retransmission consent fees from multichannel video programming distributors.

Ten years ago, Meredith brought in only 27% of its revenue from these sources. Meredith announced several other moves in response to the pandemic, including the withdrawal of guidance and assumptions about its fiscal 2020 performance expectations, a vote by the board of directors to pause Meredith’s common stock dividend and a significant reduction in capital expenditures with an effort to optimize working capital by working with customers and suppliers.

Prior to COVID-19, the company reports it was on track during the first two months of its fiscal 2020 third quarter to deliver results within its range of guidance, which it released in early February. "While this is currently a difficult time for our employees and shareholders alike, as a Board, we believe these actions are important to best position Meredith for future success," said Board Vice Chairman Mell Meredith Frazier.

The company plans to revisit its plan in late summer.

Update:An earlier version of the story reported Meredith Corp’s National Media Group, home to its print and digital titles, relies on subscriptions to drive 95% of its sales. In fact, this figure referred specifically to the group’s magazine sales, not its total sales. Meredith stated was that "approximately 95% of all Meredith magazines are sold via subscriptions."