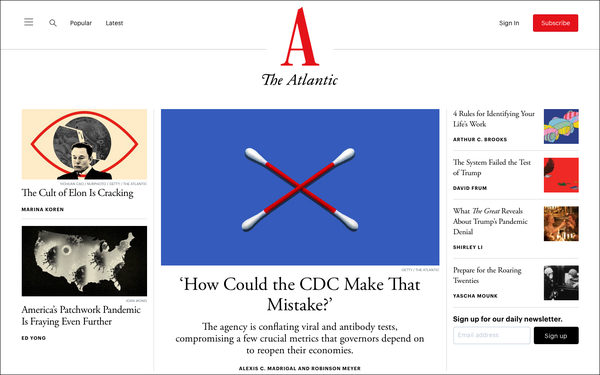 The Atlantic is letting 68 employees go, which translates into 17% of its staff.

Those cuts will mostly affect its live events division, as well as sales and marketing teams. A few newsroom positions are impacted by the layoffs.

The Atlantic is also closing its video department.

David Bradley, chairman-owner of Atlantic Media, wrote in a staff memo this morning that the cuts were necessary, due to the "overnight and near-complete undoing of in-person events and, for now, a bracing decline in advertising.”

However, The Atlantic says its readership has more than doubled since the start of the pandemic. “We've never seen anything like this moment in time,” Bradley said.

The Atlantic has gained 90,000 new subscribers since March. It reached 132 million readers across March and April.

The Atlantic put up a paywall last September.

However, the effects of the pandemic have resulted in “dramatic losses” in the company’s advertising and live events businesses, according to a spokesperson.

Going forward, The Atlantic will focus on the highest-growth areas of its business, starting with its consumer revenue business.

The pandemic has accelerated The Atlantic’s move to a consumer strategy, Bradley wrote in his memo.

The Atlantic will bring forward its target of reaching 1 million subscribers to December 2022, a goal Bradley called “highly ambitious.” The company will also focus more on its business-to-business lines of revenue.

Beginning today, The Atlantic is instituting a company-wide, temporary salary freeze, along with pay reductions for executives, to cut costs.

The company is adding six weeks of pay to its usual severance package. Employees who are let go will receive a minimum pay of 16 weeks salary, plus two weeks for each year of service beyond the first year.

The Atlantic will cover health care for those employees through the end of the year, and provide job search support for three months.

Bradley noted he does not foresee additional major changes to the company amid the pandemic:

“I know the pandemic is indiscriminate in its course, cutting through various industries and geographies," he wrote. "But, as has been the case for decades, our media economy is especially hard hit. This has been a stubborn fact the whole of my time in the sector. So, why does any of us choose to be here?

"It's just that journalism, its own infection, is hard to shake. We get to play some part — sometimes large — in our country's pursuit of truth. That is ennobling, worthy and terrifically hard to equal.”