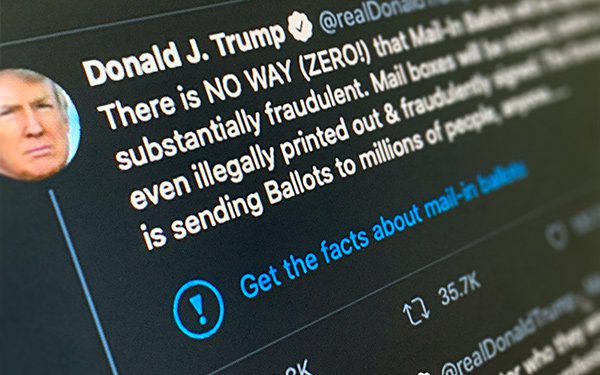 Instead, social-media sites have wanted protections in Section 230 of the Communications Decency Actthat says they can't be held liable for what other people publish on their platforms.

Twitter's decision this week to tag one of President Trump's tweets with a "fact-check" label while letting his smear of MSNBC's Joe Scarborough go unchecked is remarkably inconsistent. If social-media sites are going to take a more active role in policing speech, they need to be more transparent about how their policies work.

Twitter this week marked two of Trump's tweets that claimed mail-in ballots will be mostly fraudulent, an argument that isn't that controversial, considering that absentee ballots have been identified in at least one bipartisan study as the biggest source of voter fraud in past elections. Anyone who thinks the U.S. Postal System is equipped to ensure election integrity is sadly mistaken.

Twitter's labels said "Get the facts about mail-in ballots" and provided a link to a CNN column by Chris Cillizza that notes: "There's just no significant evidence of intentional voter fraud on anything near the scale Trump and his allies allege. Never has been." Cillizza supports his claim with links to studies and stories from the same media echo chamber.

By citing CNN, Twitter opens itself to additional criticism for being lazy about its fact-checking process -- outsourcing it to a media outlet that revels in bashing the president. Twitter has backed itself into a corner by trying to interfere with an upcoming election.

Meanwhile, Twitter isn't taking any action against Trump's tweets that falsely suggest that MSNBC's Scarborough -- a long-time critic of the president -- was somehow implicated in the 2001 death of a woman who worked for him when he was a Republican congressman in Florida. Timothy Klausutis, the widower of the deceased woman, wrote a letter to Twitter CEO Jack Dorsey asking him to delete the president’s tweets mentioning his wife.

Twitter said the messages didn’t qualify as harassment because Scarborough is a public figure. So the unsubstantiated remarks are still out there -- with no suggestion they be fact-checked. It's another sign of Twitter's failure to provide fact-checking that should be the domain of independent news media.