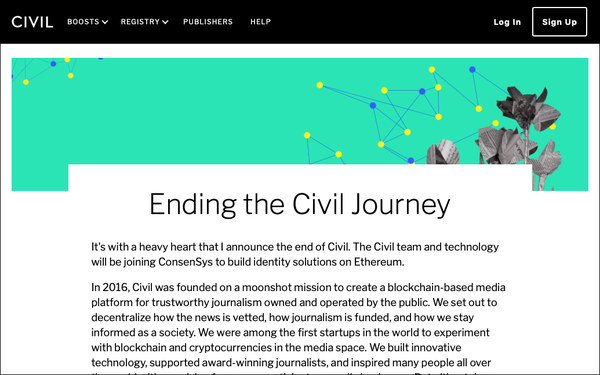 According to a report by the Poynter Institute, Civil’s eight-person staff will be folded into ConsenSys, a blockchain studio that was the platform’s main investor.

Civil, which hosted a variety of member organizations, such as the Colorado Sun, launched by Denver Post alumni, Forbes and the Associated Press, boasted more than 100 organizations across its network.

The downfall of Civil has been a on-going affair, says the report. It resulted from the end of direct financial support of member organizations, stalled business partnerships and the exit of digital news executive Vivian Schiller, who now heads media and technology programs at the Aspen Institute, in addition to other staffers.

Civil hit some roadblocks during its early days, as well, after failing to meet the $8 million goal in its initial coin offer. Instead, the platform raised $1.2 million, with 87% of those purchases coming from a single source.

Would-be funders initially found the steps required to buy tokens to be overly difficult, to which Civil offered the solution of buying tokens with cash directly.

The mission of the platform, however, centered around finding new ways to sustain quality journalism.

In August 2018, Matt Coolidge, a Civil cofounder-head of brand and communications, told Publishing Insider:
“We want to unite these people in a network that prioritizes ethical journalism above all, and which promotes a novel new way to support newsrooms. It’s a grand experiment to be sure, but we think it holds tremendous potential. It can only be realized if we can connect with that critical subset of the population that sees Civil as a way to promote a better way forward for a beleaguered industry.”
blockchain, journalism
Next story loading