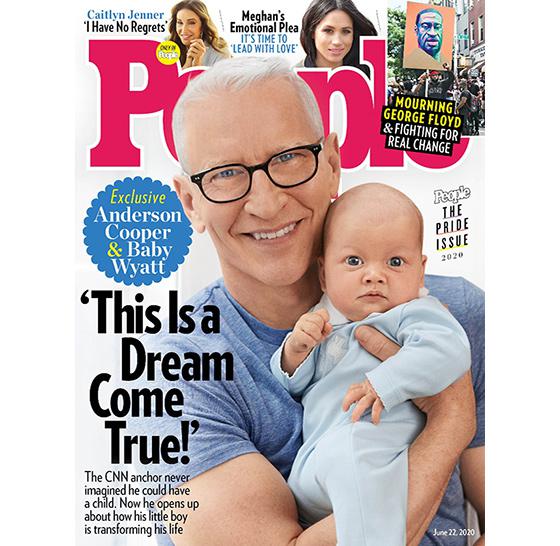 Meredith Corp.’s Peoplewill publish its first Pride issue this year, with Anderson Cooper and his son Wyatt on the cover.

The issue, which features 17 pages of Pride coverage, includes Cooper’s cover profile, along with an interview with Caitlyn Jenner five years after her transition and nine long-form coming-out stories from people like three-star Michelin chef Dominique Crenn, comedian Hannah Gadsby and professor and LGBTQ+ bookstore manager from Mississippi Jaime Harker.

In addition to the nine stories included in the print magazine, People will post an additional three in a special module on its website, featuring 12 stories in total.

PeopleTV hosts a video of Anderson Cooper showing viewers his son’s nursery. Additional videos feature the cast of “Queer Eye” and Caitlyn Jenner will post in coordination with the issue.

Conde Nast’s LGBTQ+ brand them. announced its own plans to celebrate Pride with a virtual 90-minute event called Out Now Live. The program features speeches and stories from LGBTQ+ and ally celebrities and public figures, Adweek reports.

Drag entertainers like Aquaria and Bob the Drag Queen, celebrities from the fashion world, including Naomi Campbell and Zac Posen, actor and playwright Jeremy O. Harris and musicians including Tegan and Sara, are slated to appear. So are Whoopi Goldberg, Cynthia Nixon, Julio Torres and Evan Rachel Wood, among others.

The event will also turn a focus on the Black Lives Matter protests happening across the U.S.

Out Now Live is produced remotely by them. staff and will be available online following the broadcast. It will air June 22 across them.’s website, social platforms and YouTube Live.