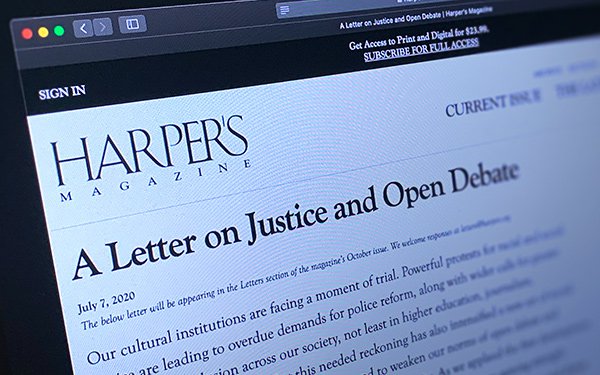 “A Letter on Justice and Open Debate” supports the movement championing greater equality, diversity and inclusion across society.

But it also expresses concern over an "intolerant climate" constricting free speech and open debate.

"The free exchange of information and ideas, the lifeblood of a liberal society, is daily becoming more constricted,” the letter states, citing "an intolerance of opposing views, a vogue for public shaming and ostracism and the tendency to dissolve complex policy issues in a blinding moral certainty."

It continues: “Editors are fired for running controversial pieces; books are withdrawn for alleged inauthenticity; journalists are barred from writing on certain topics; professors are investigated for quoting works of literature in class; a researcher is fired for circulating a peer-reviewed academic study; and the heads of organizations are ousted for what are sometimes just clumsy mistakes.”

The effort was organized by Thomas Chatterton Williams, a columnist for Harper’s and a contributing writer for The New York Times Magazine.

The letter took about a month to put together.

After publication, a few of the signatories took to Twitter to express regret for signing the letter and appearing alongside some names that have been embroiled in their own controversies. J.K. Rowling, for example, has been condemned by many recently for her views on trans people.

“I did not know who else had signed that letter. I thought I was endorsing a well meaning, if vague, message against internet shaming,” tweeted transgender author and professor Jennifer Finney Boylan. She added: "I did know Chomsky, Steinem, and Atwood were in, and I thought, good company. The consequences are mine to bear. I am so sorry."

Historian Kerri Greenidge claimed on Twitter that she did not endorse the letter and asked Harper’s for a retraction. A spokesperson for Harper’s Magazine confirmed to Publishers Daily that Greenidge had signed off on the letter.

However, Harper’s “respectfully” removed her name.

The editors of Harper’s are soliciting responses to the letter. A selection of the responses will appear alongside the letter in the magazine’s October issue.