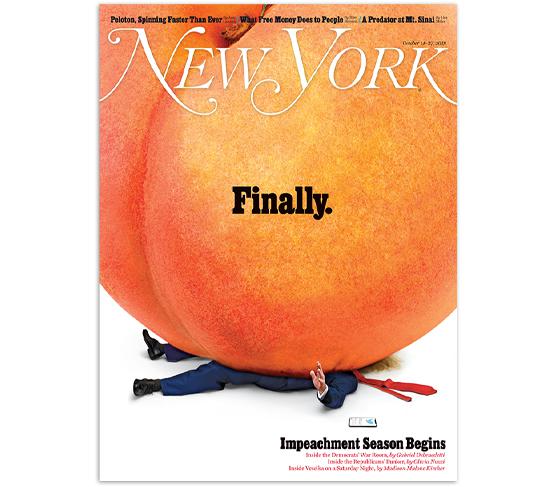 The award was announced during ASME's Best Cover Contest, held this afternoon in a virtual presentation on YouTube hosted by ASME executive director Sid Holt.

The winning cover, from New York’s October 14–27, 2019 issue, has the words “Finally” written across the large orange peach, with the cover line: “Impeachment Season Begins.”

The illustration is by Joe Darrow. The cover also won the category of “Best News and Politics Cover.”

This year, the ASME judging group was made up of 120 magazine editors, art directors and photo editors. They chose five finalists, including a winner, in 10 categories.

The ASME Board of Directors chooses the ASME Cover of the Year from the winners of the other categories.

There was a tie for the “Best Entertainment and Celebrity Cover,” between The New York Times Magazine’s cover featuring pop icon Madonna and the WSJ Magazine’s The Innovators Issue.

The New York Times Magazine won two other categories: “Best Sports and Fitness Cover” for its issue on women in big-wave surfing and The Climate Issue.

The New Yorker won “Best Business and Technology Cover” and California Sunday Magazine won “Best Travel and Adventure Cover” for its issue tracking the death of a glacier.

Every cover in the contest was also posted on Facebook, where readers voted for the winner of the ASME Readers’ Choice Award.

Bon Appetit won “Most Delicious Cover” in both competitions for its Holiday Issue.

This year, ASME expanded its contest with nine new awards for Photography and Illustration, which honor visual excellence both in print and online.