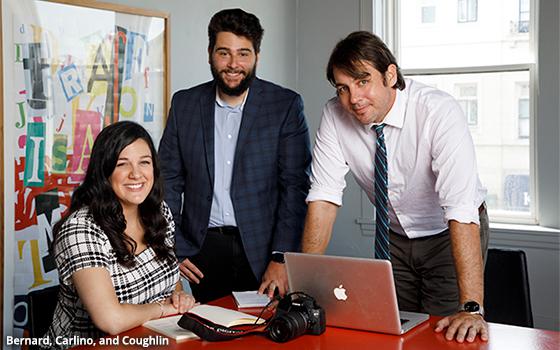 In March, 22nd Century Media closed down, leaving tens of thousands of suburban Chicago readers without a local-news source as they saw the company’s 14 suburban newspapers disappear. Along with the loss of those publications, 21 journalists lost their jobs.

Joe Coughlin, Megan Bernard and Martin Carlino launched a Kickstarter campaign today in the hopes of reaching $50,000 to launch the newsroom later this summer, with a target September opening.

The Record will serve the communities of Wilmette, Winnetka, Northfield, Kenilworth and Glencoe in the township of New Trier. Should the campaign exceed its goal, the organizers will expand the newsroom’s team and possibly its coverage area.

The Record proposes raising funds through memberships, donations, semi-annual events, grants and community and industry partnerships, among other initiatives. It will publish nonpartisan local journalism free from the influence of financial interests.

All proceeds will be invested in the news service.

“We knew we weren’t done in March. We had a responsibility, we were not giving up. Restoring local news to these readers has been our motivation for months as we built The Record,” stated Coughlin, who serves as editor in chief. “And we want to build it the right way. We aren’t sure if this is the precise model to solve the local-news problem in Chicagoland, but we think it could be. So we’re back — with lofty aspirations and a team that has proven it can deliver unbeatable local news and sports coverage every day.”