Hyper-Local News, From Way Back When 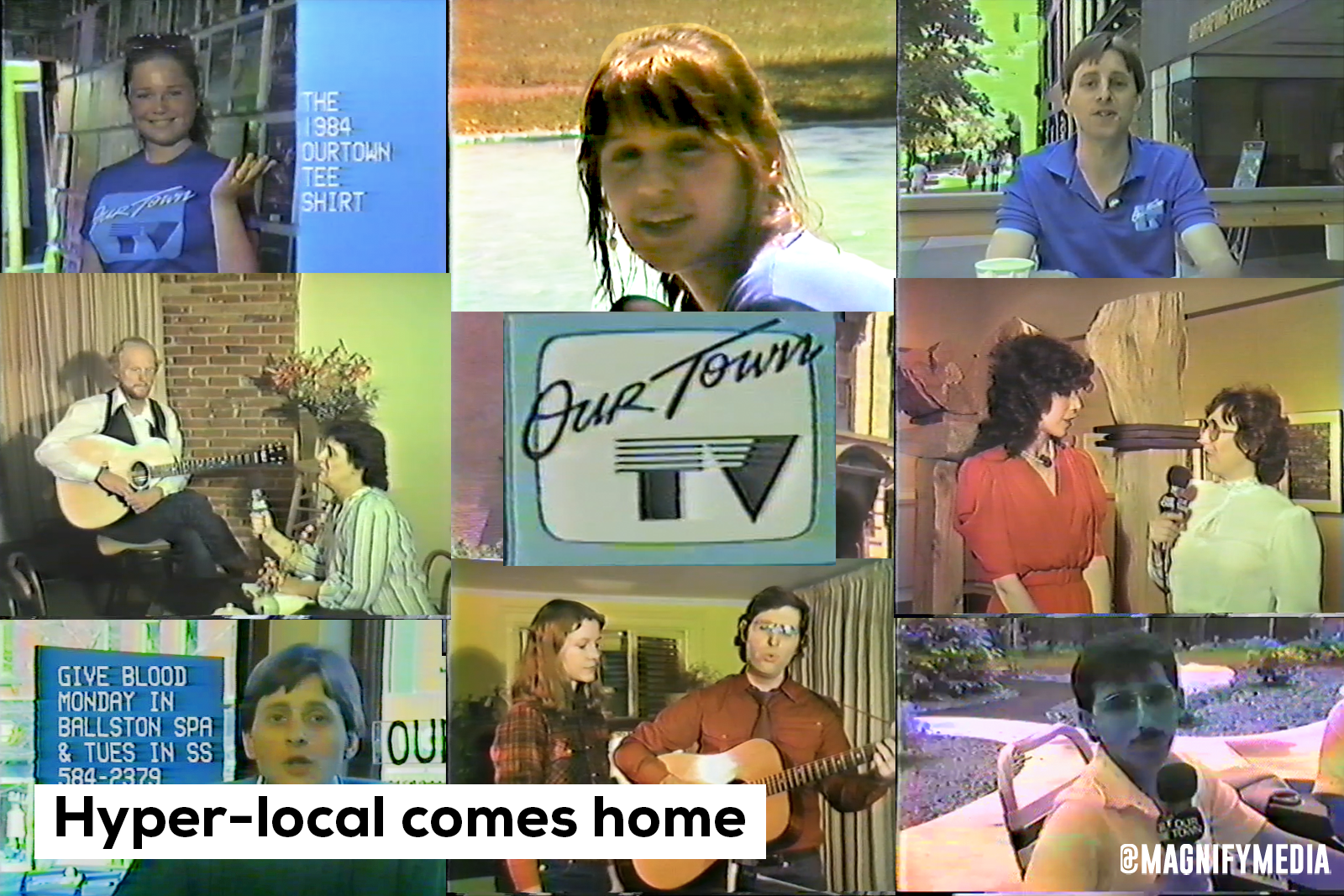 What is hyper-local news, and is there any chance it will emerge as the voice of our communities?

It turns out there’s an example buried deep in the archives that may hold some clues.

Back in 1983, a bunch of college kids had a crazy idea: What if TV could tell stories people cared about? To be fair, they didn’t have any idea what they were talking about. But they had some new technology called VHS, two decks and a camera that could make local TV possible. And they had a local cable TV provider willing to hand over the airtime.

The idea was a show called "OurTown TV." It was daily, so people could get in the habit of seeing their town every day. The show was produced in an unusual partnership with the community: Reporters were often volunteers, and local businesses were invited to share their expertise in short segments called “infomercials.”

Looking at it today, the old tapes reveal some interesting clues. The program was campy, and the production values were simplistic. But the content, by today's standards, would be called “authentic”: local high school sports teams, musicians performing at the now-legendary Cafe Lena, cooking tips from local restaurants, advice on how to winterize your home from the local hardware store.

The company was started by Dave Henehan, who hosted the daily show, and myself. I was mostly behind the scenes, selling infomercials and directing the daily program.

As I was rooting around in old files, I found the original business plan, as it was proposed to the management at Jones Intercable: “Today, the Information Age comes home,” the proposal proclaimed. “OurTown television, a bold new concept in hometown programming. It’s the first time that TV in Saratoga will be produced by Saratogians.”

The local newspaper, The Saratogian, heralded the show’s arrival is a full-page article.

Some of its coverage was prescient:

"The show is an attempt at professionalism that falls short. Henahan’s gestures and studiedly sincere ‘radio voice’ (he and Rosenbaum worked together for two years at WSPN, Skidmore College’s radio station when they were students there) seem affected; the “infomercial” stars speak too fast, too slow, or stare at the camera, then nervously look away; some of the editing is choppy. It is somewhere between a home movie and a David Letterman on-the-street spot.

“But amateurism may be part of the show’s appeal. These are not professional performers, like the people on TV news programs or talk shows; they’re just average people who do something else for a living, who happen to have gained access to roughly 10,000 living rooms via the wonders of video and cable."

Yes, amateurism was part of the show’s appeal, with authenticity honored over polish and gloss.

Is it possible that people would rather have sharp-tongued social media than news and voices from around their neighborhood? Somehow, I think not.

So what did we learn from this experiment in hyper-local TV?

Just to be clear, it wasn’t news. There was no investigative reporting, no hard-hitting journalism. It was chockful of local features -- and the audience enjoyed it. They called, they wrote in, they mentioned to local businesses that they’d seen them on TV. It was genuinely grassroots, and it worked. It was modestly profitable, and over the years it grew, expanding its reach and the communities it served.

But the question worth asking is this: Was it too early? Why isn’t there any local video in the hyper-local news that is now struggling to survive? In my neighborhood, there are a few local blogs, where I enjoy reading about restaurant openings and neighborhood news. But there doesn’t appear to be an advertising base or any way to subscribe. It if makes money, it’s unclear how.

Meanwhile, local TV news continues to operate in the old model -- “If it bleeds, it leads” -- and is virtually unwatchable. There’s no room on TV for hyper-local content.

So, what would "OurTown" look like today? First of all, it would be shot on iPhones. Community arts organizations, sports, and other events would be recorded by viewers, and submitted via the internet to a central editor who could edit, add graphics, and offer details like calendar listings and links to websites and tickets.

The segments from 1983 seem relevant today: "In And Around Town Report," "Tune In and Win," "SportsWatch," "Cooking and Cuisine,"  "Entertainment Daily." These stories today would be called lifestyle reporting. Back then it was just called community news.

And what was the goal of the local "OurTown" experiment? From The Saratogian: "Rosenbaum says 'OurTown' will strike a balance between advertising dollars and community service, and won’t sacrifice the latter for the former. 'Don’t get me wrong, we’d really like this thing to make money,' he said. 'But we’ve got limits. We won’t lie. We won’t try to pass ourselves off as experts on things we know nothing about. And there’ll be no naked ladies or white slavery shows. If we can’t make it without that, the whole thing goes down the toilet, and that’s it.’"

Within six years, the local "OurTown had grown to reach all of New York state, with the syndicated weekly show "BROADCAST: New York."

"A small television production company in Saratoga Springs, N.Y., has already proved that niche news programming can be as promising a business," wrote The New York Times in 1992. The lessons learned in hyper-local seem more urgent and relevant today.