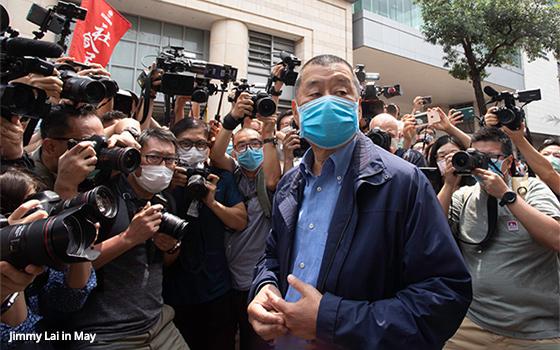 Hong Kong police this week arrested Jimmy Lai, the media tycoon who publishes the popular Apple Dailytabloid, in a shameful action against one of the most outspoken critics of the Chinese Communist Party. The 71-year-old publisher now faces life in prison for alleged violations of a harsh security law that China imposed on the city in June.

Most Americans probably haven't heard of Lai, who has become a leading figure in the pro-democracy movement in Hong Kong. He made his fortune in the garment business before starting a media company about 30 years ago. Now, he  faces the real possibility of being silenced as China imposes its authoritarian will on a city that had been a bastion of press freedom for generations.
Police arrested Lai at his home, then paraded him in handcuffs through Apple Daily's newsroom for maximum effect. About 200 police officers searched its offices and asked staff for identification to intimidate them even further.
Lai was charged with sedition, criminal fraud and colluding with foreign forces, whatever that means. Police also arrested his two sons and four employees of Next Digital, Lai's publishing company. Lai is the highest-profile person to be arrested under Hong Kong's new security law that previously has ensnared 15 people, including some teenagers.
Lai's arrest also exposes the hollowness of a pledge by Carrie Lam, Hong Kong's chief executive, that its residents would enjoy freedom of the press after the law took effect. The promise amounts to typical Orwellian doublespeak characteristic of every authoritarian regime.
The U.S. last week imposed sanctions on Lam and 10 other Hong Kong officials for depriving the city's residents of their rights, spurring China to retaliate by sanctioning 11 Americans, including Sens. Ted Cruz and Marco Rubio.
I have to admire the temerity of Ryan Law, editor in chief of Apple Daily, who said the newspaper won't be intimidated, according to a Reuters report.
"Business as usual," he said.
It's hard to imagine China will retreat from its more aggressiveness stance against Hong Kong's independent news media. However, anyone who believes in press freedom should condemn the country's actions to stifle the news media.