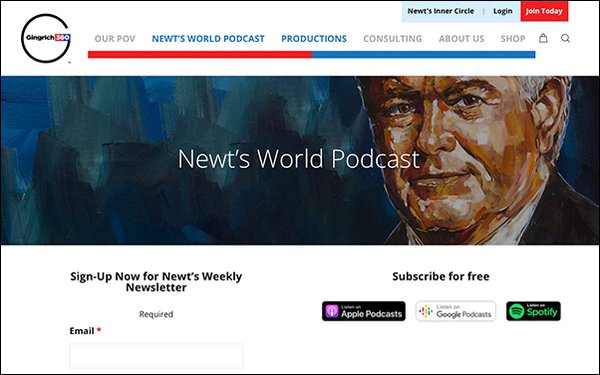 Newt Gingrich’s Gingrich 360 is set to co-produce a new podcast series with iHeartMedia via a deal that builds on the successful launch of the “Newt’s World” podcast.

Since its launch, “Newt’s World” has grown to more than 6 million listeners and posts three times a week.

The slate of shows, which include four launching this year, focus on conservative views delivered by notable voices and personalities.

First up is “Rob Smith is Problematic,” a weekly podcast hosted by Smith. The show is set to air every Tuesday. Other shows set to launch this year include “Outloud with Gianno Caldwell.”

“I enjoy the personal connection and immediacy of podcasting,” stated Gingrich. “I am excited to expand the Gingrich 360 brand with iHeart to develop and produce series with millennial, African American, Hispanic, and Gen Z voices. They will help define and lead the next generation of Americans as we overcome challenges and find new opportunities.”

The deal includes the opportunity for new podcasts to extend to other platforms, such as TV or film.

“Taking these brands to other platforms through the iHeart marketing machine to help expand audiences is a targeted way to get these important voices heard,” stated Gingrich 360 president-CEO Debbie Adler Myers.