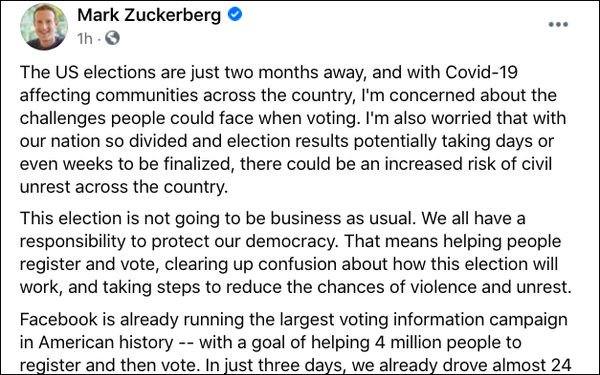 As the U.S. Presidential election enters its 60-day window, Facebook this morning announced several new steps it is taking to avoid playing a role in disrupting the vote and "reducing the risks of post-election confusion," including prohibiting any new ads on Facebook platforms including Instagram in the week before the election.

The social network also highlighted new "Voting Info Center" icons and links on its Facebook and Instagram apps, and instituted a forwards limiting function on its Messenger messaging service to "slow the spread of viral misinformation."

"This election is not going to be business as usual. We all have a responsibility to protect our democracy. That means helping people register and vote, clearing up confusion about how this election will work, and taking steps to reduce the chances of violence and unrest," Facebook Founder and CEO Mark Zuckerberg said in a post announcing the new steps this morning.

He emphasized the role Facebook might play in helping to avoid post-election turmoil if, as many expect, a losing candidate and his supporters -- and possibly hostile foreign actors -- try to cast dispersions about the legitimacy of the official vote.

"Since the pandemic means that many of us will be voting by mail, and since some states may still be counting valid ballots after election day, many experts are predicting that we may not have a final result on election night," Zuckerberg, noted, adding, "It's important that we prepare for this possibility in advance and understand that there could be a period of intense claims and counter-claims as the final results are counted. This could be a very heated period, so we're preparing the following policies to help in the days and weeks after voting ends."

Among those steps, Zuckerberg said, would be:

• Preparing users for the possibility that it might take a while for election results to be made official.
• A partnership with Reuters and the National Election Pool to provide authoritative information about election results.
• Adding an "informational label to content that seeks to delegitimize the outcome of the election or discuss the legitimacy of voting methods."
• Enforcing Facebook's "violence and harm policies more broadly by expanding our definition of high-risk people to include election officials in order to help prevent any attempts to pressure or harm them, especially while they're fulfilling their critical obligations to oversee the vote counting."
• Strengthening its enforcement against militias, conspiracy networks like QAnon, and other groups that could be used to organize violence or civil unrest in the period after the elections. 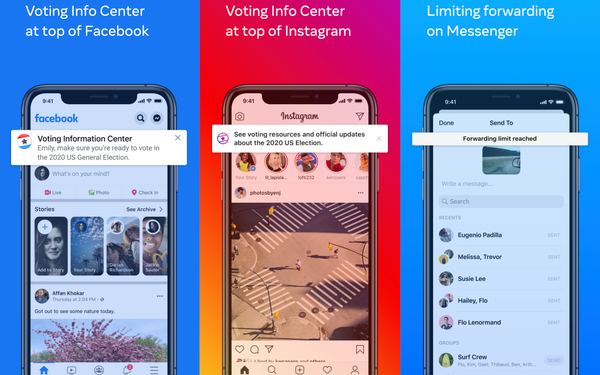