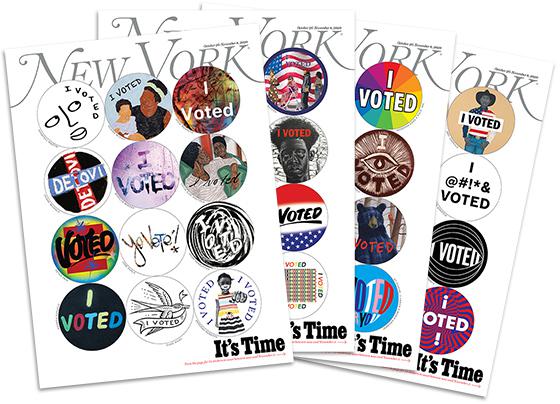 For next week’s issue of New York Magazine, 48 artists were asked to design their own “I Voted” stickers, which will appear on four different covers, each featuring 12 sticker designs.

The issue will also have a peelable sheet of the stickers inside the magazine.

The inspiration behind the cover: millions of Americans are voting by mail this year and missing out on their “I Voted” sticker. It is created in collaboration with the nonprofit, nonpartisan voting organization I Am A Voter.

The designs featured on the covers were created by artists Shepard Fairey, KAWS, Amy Sherald, Barbara Kruger and Lorna Simpson, to name a few.

The “I Voted” stickers were made in different mediums, including photography, line drawings and graphic text, and in different languages, like Spanish, Chinese and Arabic.

“My American flag represents a 'whole' country," writes Sherald, adding "It does not disregard our past sins but stands at attention to America’s original sin and in doing so, forges a path forward to a more perfect union."

Christine Sun Kim commented on her design: "In American Sign Language (ASL), we sign 'finish' as a way to conjugate the past tense… For the sticker design, I used “vote finish” as my version of the English 'I voted' stickers."

The sticker, she added, also resembles how you would sign "vote" in ASL.

“I created a ballot box speaker because our votes amplify our voices," stated Fairey. "Our votes broadcast what we believe in, and robust voter turnout builds a more truly representative democracy.”

New York Magazine will distribute 500,000 stickers for free at retail locations, including Crate and Barrel, CB2, Warby Parker and EHE Health, which are supporting the project’s printing costs, as well as other stores.

The stickers will be available at select book stores, museums, nonprofit organizations and official polling sites.

New York Magazine says it has partnered with artists frequently over the years.

For its 50th anniversary, for example, Fab 5 Freddy, Kerry James Marshall, Yoko Ono, Judy Chicago, George Condo and others created their own New York Magazine covers, which were printed on walls and billboards across the city.

The magazine hits newsstands on Monday, October 26, and is available for pre-order.

Separately, Time is publishing its own voting-related issue, a special report on the last few days of the 2020 presidential campaign.

For the first time in its nearly 100-year history, Timereplaced its logo on the cover of the magazine with another word: “Vote.” The artwork on the cover is by Fairey, who also designed one of the vote stickers for New York Magazine’s upcoming issue.

In his letter to readers, Time editor in chief and CEO Edward Felsenthal writes: “Few events will shape the world to come more than the result of the upcoming U.S. presidential election.”

Time, like a number of other publishers, has also provided its readers with a guide on how to vote this year.

Separately, Microsoft and NewsGuard, a platform that reviews and rate the credibility of websites and social media, have teamed to produce an interactive media literacy quiz, available at KnowMyNews.com.

The nonpartisan quiz is designed to help voters sift through the deluge of information circulating online about the issues and the voting process ahead of the 2020 election.