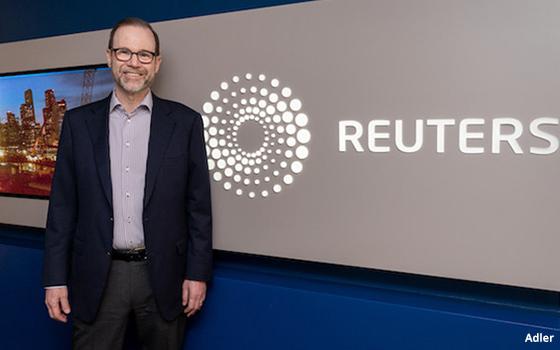 editor in chief Stephen J. Adler will retire in April, after 10 years at the helm.

“It has been an honor, and certainly the highlight of my career, to lead this extraordinary news organization,” Adler wrote in a note to staff.

“I will miss the daily, hourly, and minute-by-minute Reuters adventure and will surely miss all of you. But it is the right time for me to pass the baton,” he said. “I’m greatly looking forward to writing, teaching, advocating for press freedom and media literacy, and finding my way toward unexpected new challenges.”

Under Adler’s leadership, Reuters received hundreds of journalism awards, including seven Pulitzer Prizes and eight Pulitzer finalists — a record for the news organization.

Adler joined Thomson Reuters in 2010 as senior vice president-editorial director of the company’s professional division. He was named editor in chief of Reuters the following year. Previously, Adler was editor in chief of BusinessWeek and a reporter and editor at The Wall Street Journal.

Separately, Colleen McCain Nelson is the new executive editor of The Sacramento Bee, and regional editor for McClatchy’s California news outlets, including The Fresno Bee, The Modesto Bee, The Tribune in San Luis Obispo and the Merced Sun-Star.
McCain Nelson was previously opinion editor at McClatchy and editorial page editor for The Kansas City Star.

Under her leadership, Opinion is now among the top five content categories in driving subscriptions at McClatchy.
Previously, McCain Nelson had worked at The Wichita Eagle, the Fort Worth Star-Telegram, The Dallas Morning News and The Wall Street Journal.

She begins her new role on January 19 and will move to California in the first quarter.