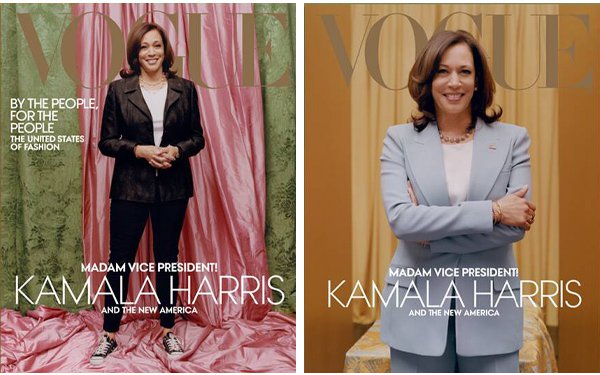 Essence magazine added its voice to the chorus of people criticizing Condé Nast's Vogue magazine for its choice of covers showing Vice President-Elect Kamala Harris. The print image of Harris "minimized the respect due to the Black woman who has reached the second-most-powerful office in our country’s government," Essence said in an op-ed.

Harris will become the first Black woman and person of South Asian descent to be Vice President of the United States, when President-Elect Joe Biden is inaugurated on January 20. Vogue commended her breakthrough achievement with a glowing profile and cover shoot.

Social-media critics took issue with Vogue's photo of Harris, which shows her wearing sneakers, jeans and a casual jacket in front of a wrinkled pink drape and green backdrop. They blasted Vogue, which is led by editor Anna Wintour, for disrespecting Harris by showing her in a shabby setting.

"The quality of the photo, the raggedy nature of the backdrop and particularly her expression and stance are uninspiring, if not low-grade," tweeted Adrienne Lawrence, a lawyer and pundit. Thousands of others also posted disapproving comments to Vogue's Twitter account.

The choice of covers stirred more controversy after Yashar Ali, a columnist for New York magazine, reported in a tweet that Harris' team didn't expect that picture to run. Instead, they thought another picture showing Harris in a light-blue pantsuit adorned with a U.S. flag lapel pin would be on the cover. That photo was used in Vogue's digital edition.

"That was the cover the Vice President-elect's team and the Vogue team, including Anna Wintour, mutually agreed upon ... which is standard for fashion magazines," Ali reported. Sources at Vogue denied that characterization, saying Harris and her team selected both looks, the New York Post reported.

The magazine selected the cover image that best captured her "personality and authenticity," according to the newspaper's sources.

“The micro-aggression of visually diminishing her position with the chosen cover image is especially disappointing," Essence noted in its op-ed. "She should be seen as an inspiration for every young girl and woman around the world to know that they can aspire to heights yet unseen, but she also must be fully respected according to the leadership role she will now hold.”

Vogue's response: "The team at Vogue loved the images Tyler Mitchell shot and felt the more informal image captured Vice President-elect Harris's authentic, approachable nature -- which we feel is one of the hallmarks of the Biden/Harris administration. To respond to the seriousness of this moment in history, and the role she has to play leading our country forward, we're celebrating both images of her as covers digitally."