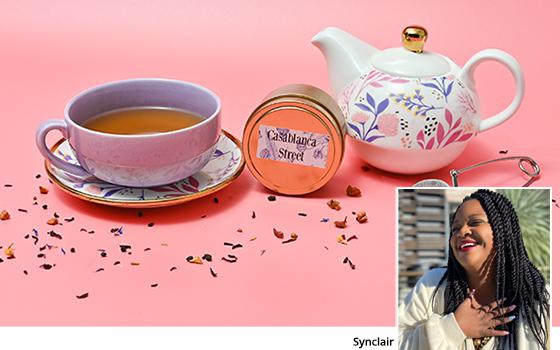 Whenever I sought some advice from my little and sagacious Italian grandmother during a challenging life moment, it always started with a cup of tea. “Sit down, I’ll put the pot on,” she’d say -- a ritual as predictable as it was comforting.

Business coach and serial entrepreneur Stephanie Synclair has the same idea. After a year of pandemic, social unrest, and, well, as grandma would say, agita, America could use a cup of India Street Vanilla Chai, preferably served in a single-serve ceramic pot and cup combo.

Her second D2C startup, LaRue 1680, launched in October fueled in part by her existing social media base of followers. But then, "Bridgerton" happened. It turns out, Netflix’s hit period softcore series seems to find time for a lot of tea between those infamous trysts. All of which is a far cry from Grandma’s kitchen ritual, but LaRue 1680 is enjoying a fast early launch by building a brand for luxury tea and accessories on the updraft of two serendipitous trends. Synclair spoke with us about the art of building brands via organic social media, the challenges for Black businesswomen even on digital channels, and why Tea?

MediaPost: Okay, why tea, why now?

Stephanie Synclair: In 2012 my son and I spent a year traveling through Europe and Asia, and that's when I realized, specifically in Asian cultures, how important tea is. It's an integral part of lifestyle. I just never found anything that gave me that same international feel.  LaRue is a tea that takes you to different destinations. So that's “why” tea. I just absolutely love it, and if you love something, you might as well sell it.

MP: You flipped the script on influencer marketing by starting out as an influencer and then leveraged it to launch a product. How did you come at that?

Synclair: That’s my ‘cheat code’ for myself. If you already have any sort of following or an established brand, why pretend that your following does not exist to start from scratch? People want to connect with the brand, often the owner or the founder.

And I learned really quickly, when people fall in love with you, they'll fall in love with anything that you sell. And I knew they would love it. I didn’t have to hire any influencers. I'm the influencer. It’s not even about the tea. It's hey, watch me open this new business in the middle of a pandemic. I'm very transparent about everything, and people love it.

MP: On the other hand, you’re bringing them into the brand without acting as influencer pitch man.

Synclair: If you go look at LaRue specifically, I don't show up much. It’s very much done on purpose; we’re building a business here. In order to [scale] you can't be the sole face of the company.

MP: I noticed at your site you are drafting off the "Bridgerton" craze. Has this succeeded?

Synclair: I love playing off things that are happening in pop culture. When I watched "Bridgerton," I knew it was going to be a hit. It just made sense. The ritual of tea is like my fancy time. Everything literally is slow, and you’re present and that's really where I think society needs to be: present. So as I watched "Bridgerton," it literally hit me like a ton of bricks -- they have tea.

Synclair: Yes, and I don't know that I thought "Bridgerton" would create such an uptake in sales. But it was released, and within a week I noticed at least a 50% jump. And that was so interesting to me, and it goes to show how much pop culture in the different shows that we're watching influences what's happening in business.

MP: What did you learn from building your previous beauty brand exclusively on social?

Synclair: I figured, if I can show up on camera, people will absolutely fall in love with me, and so I did almost the same thing that I did with the tea. From the beginning I walked people through the process, so I started a YouTube channel and I started talking about ‘I'm starting a hair care/skincare brand.' People got caught up in the growing of the business, and so I used the exact same formula. It just comes natural to ask people to come along. I want you to be involved with this journey, after all, I'm selling to you, so I want you to be a part of this.

MP: What lessons did you bring over to LaRuse 1680?

MP: Video is extremely powerful. I found video and audio content to be the number one thing to drive people. And you would think that 14 years later something had changed. It has not. It's gotten even more powerful. The only difference is, then we would do longer form video and now we're more at 60 seconds. And so instead of 10 minutes to have a conversation or catch your attention, I have a minute.

MP: So what social tactics succeeded for organic growth?

Synclair: Consistency. Consistency is really difficult in social media, especially when you're making short pieces of content, which means you now need to make more content. But it works. So I'm here on vacation, but I'm creating content while I'm on vacation. People need that consistency, and they need to keep seeing the brand, and they need something to catch their attention.

MP: But also now, 12-13 years later, you've got many more platforms to service. So how do you manage that piece – TikTok, IGTV, Facebook TV, YouTube. How does all that work, and what are the channels that are most important right now?

Synclair: So I believe in having a space on every channel. But I don't believe you have to utilize every channel. Now that goes against what a lot of gurus will tell you. Every brand doesn't actually fit well in every space. With LaRue, we can be more visual, and so Instagram is a whole lot stronger for us than Facebook. Whereas, in the coaching space, Facebook and Twitter is a lot stronger than Instagram.

So it's really understanding what makes sense for your brand.

MP: You've written and coached on the challenges that black women in America face in starting a business. How do those systemic challenges occur in the digital business environment?

Synclair: It's really interesting. But unfortunately, sometimes we still deal with is just being black, and people seeing that it's a black-owned company, and choosing other companies. I've done it myself in marketing. Instead of using a black person's face, I would make it a point not to, because of the times we were in.

It's unfortunate, but it's a reality. For years we've had to put other faces on the cover to just get you in, and that's one thing that no one really talks about. Now what's interesting about the time we live in currently, though, that has sort of shifted. Being Black is a little popular right now. They're consciously looking for Black faces and bBack offerings, so that has been interesting.

But you still battle. Sometimes on Instagram I'll use a Black-owned-business hashtag. I can’t tell you how many people DM me and say, you know, I really wanted to buy your tea, but you found it necessary to tell me you were a Black-owned business, and so now I don't want your tea. These are still things we deal with.

MP: But what are some of the key strengths that the Internet has in overcoming some of those challenges?

Synclair: With the micro content that's out there, people get to see enough of you that even if they instantly sort you as not for them, they'll like you and still follow you. And then they'll quickly realize, wait, I actually do want this. I actually do need this.

I think that is a strength in the Internet space, seeing you show up multiple times. Another strength is the affordability of ads as opposed to traditional media to put ads on TV or to get a half page or a full page on [the] New York Times or Post or whatever you're using. It's not affordable for most small businesses, whereas with the Internet, really, if you had a $50 a day ad budget, you can actually make some moves in the space.

And, so again, startup capital: I still don’t believe that you should start a business with no money. You can, I just think that you're creating more hurdles for yourself. You need a little capital. And I do mean a little. Think about $50 a day, at least to get you started and get people knowing about the brand.

I really believe it's not about the quantity of people. We have 300 on Instagram, and we're constantly getting sales in. And so it's not about quantity. It’s really quality and who’s sharing your content, who's talking about you. Someone messaged me yesterday and asked if we shipped to Asia. We absolutely do -- as long as you pay shipping.