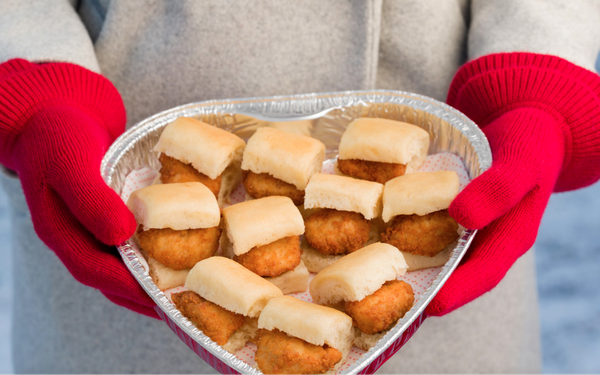 With the Super Bowl behind them, restaurants are going all-in on Valentine’s Day, the holiday that used to be their second biggest day of the year.

But it’s going to be hard to cushion the blow. The National Retail Federation says just 24% intend to celebrate with an evening out, compared to 34% last year. That’s the lowest in the survey’s history.

Still, 41% say they will plan a special dinner at home, and that‘s the focus of many restaurants’ hopes.

The innovations are coming at the low-end, like the adorable new heart-shaped biscuits Hardee’s is introducing, or the sweet nothings coming out of the kitchens over at Krispy Kreme donuts.

Chick-fil-A is packing up all kinds of treats in heart-shaped trays, including Nuggets, Chick-n-Minis, cookies and brownies.

Take-home inspirations are also blazing at the high end. For example, Washington D.C.’s Immigrant Kitchen is selling a $79 “Light my Fire” collection of desserts for two that comes with its hand-held blowtorch for finishing touches.

Some are taking romantic pampering well outside the edible. Red Lobstersays it’s keeping romance alive with flowers: When members of its loyalty program spring for a bouquet from 1-800-Flowers, they earn a free Maine lobster tail.

But restaurants aren’t giving up on dine-in special offers, either. In some places, there are extended pushes for more relaxed restrictions. In New York City, for example, they’ve just got the all-clear to reopen at 25% capacity,

And consumers are finding their way into a bewildering array of tents, yurts, igloos and hobbit houses popping up all over the country.

(I can’t stop looking at images of the Ocean House in Watch Hill, Rhode Island, which has turned vintage Vermont ski gondolas into seating for the Veuve Cliquot Fondue Village for breakfast or afternoon crepes.)

Many are using price to tempt Cupid. California Pizza Kitchen is bringing back heart-shaped ‘zas and the “Sweet Deal for Two” dine-in promotion, a $35 prix fixe deal, along with a sweepstakes offer.

Our favorite so far, though, comes from Dunkin'. Besides sweet treats and drink combos, it’s also putting Marriage on the Menu.

The contest gives fans in New York the chance to win a wedding, teaming up with I Do Drive Thru to offer pandemic-friendly nuptials, including festive décor, photos, Dunkin' swag and a $500 cash prize.