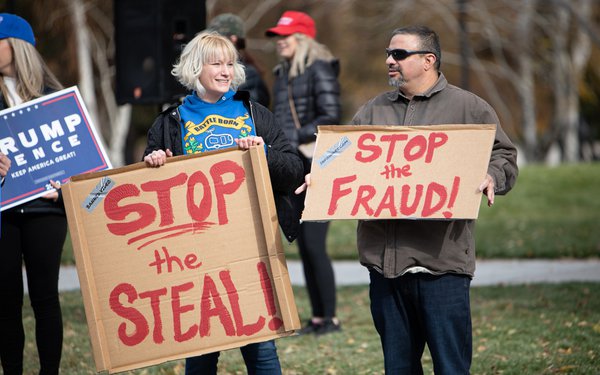 Most Americans were exposed to misinformation and made-up news last year, and many think it had a major impact on the election. But what they saw as fake news depended on their ideological views, judging by "How Americans Navigated the News in 2020: A tumultuous Year in Review," a study by Pew Research Center.

A full quarter of Republicans and Democrats relied on “divergent media ecosystems,” those that reflect their ideology.

For many Republicans, that meant Fox, and for Democrats CNN.

However, 48% of Democrats and 34% of Republicans used politically mixed news sources such as the ABC, CBS and NBC TV networks.

But their feelings and behaviors were dependent on a variety of factors.

One was age. Republicans who turned mostly to news outlets with like-minded audiences were more likely to be 50 and older.

Education is another demarcation. Roughly 60% of Democrats who favor left-leaning news outlets have college degrees, and 34% have postgraduate degrees. Race was another factor — the above group is more likely to be White. Black voters prefer more diverse news sources.

Overall, 60% of respondents were concerned that made-up news had a large impact on the 2020 election result. And 72% saw some election news that seemed “completely made up.”

In 2019, 48% were concerned about the prospective influence of made-up news on the election.

But the definition of made-up news also depends on ideology.

“Without a doubt, many Americans who report encountering made-up news actually did, while others likely came across real, fact-based news that did not fit into their perceptions of what is true,” the study states.

One area of coverage they didn’t trust was COVID-19. In March 2020, they cited contradicting claims about:

Republicans who looked to Donald Trump as a major source of news, 32% of the total, saw the media’s election coverage as inaccurate and harmful to democracy, and 61% say voter fraud is a major problem.

Social media, where roughly 18% of adults got most of their political news, was a source of inaccurate news last year, and for that reason is widely distrusted. But that doesn’t mean the social networks are dominated by Trump.

“Americans who rely most on social media for their news (and who also pay less attention to news generally and are less knowledgeable about it) get exposed to different misinformation threads than those who turn only to sources with right-leaning audiences, or to Trump,” the study states.