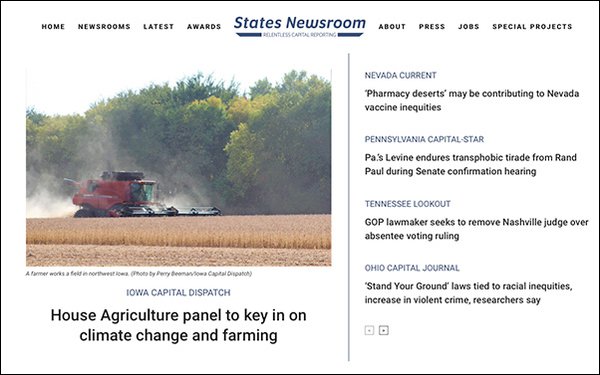 State new gathering has suffered in this era of disappearing newspapers and shrinking newsroom staffs.

On its website, States Newsroom notes Pew Research Center statistics that newsroom employment in the U.S. fell by 25% in the decade between 2008 an 2018, and that only 30% of newspapers have reporters assigned to cover statehouses.

In contrast, States Newsroom employs 78 full-time editors, reporters and support staff in 20 states, while handling funding, back-office functions and other tasks for the newsrooms.

Founded by Chris Fitzsimon in 2017, the nonprofit plans to launch five additional outlets this year, in Idaho and New Hampshire, New Jersey, Oregon and New Mexico. It recently started the Daily Montanan.

Fitzsimon says state coverage needs “new models and new ways to make sure we’re not just holding politicians accountable … but also explaining to people the impact of the decisions that they make in the legislature about voting, the environment, civil rights, health care, all the issues that affect our lives every day,” according to Poynter.

States Newsroom, which has a national bureau in Washington, D.C., seeks to “relentlessly” report on doings in state capitals.

On Friday, its home page featured stories such as   House Agriculture panel to key in on climate change and farming,” from the Iowa Capital Dispatch, and “’Stand Your Ground’ laws tied to racial inequities, increase in violent crime, researchers say,” from the Ohio Capital Journal.