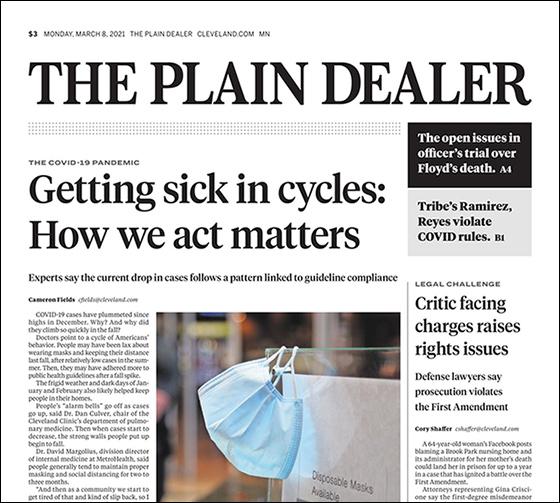 Plain Dealer Publishing Co., printer and distributor of The Plain Dealer of Cleveland has received a $3.8 million Paycheck Protection Program (PPP) loan it says will help pay employees and recover from the impact of the pandemic, according to cleveland.com, the related digital product that serves the Cleveland area.

Plain Dealer Publishing is a subsidiary of Advance, and also prints Advance newspapers in Michigan. Two other Advance subsidiaries have also received PPP loans: A newspaper operation in Springfield, Massachusetts was granted one for over $2.6 million, and a Hudson County, New Jersey firm was given $290,000, according cleveland.com.

Smaller publishing operations have received PPP funds, but companies such as Plain Dealer Publishing have been excluded because they are subsidiaries of larger companies, according to its site. However, that was redressed in the pandemic relief bill passed in December 2020.

The funds are desperately needed as newsrooms nationwide face layoffs and other forms of cost-cutting.

Advance Local, sister company to Plain Dealer Publishing, has also applied for PPP Loans, but has yet to learn if it has bee approved. Advance Local subsidiary Advance Ohio produces all content for The Plain Dealer and its site.

Financially hit by the pandemic, Advance Local stopped a retirement account match and implemented pay cuts for furloughed workers. But it says it has restored those cuts and gave may employees bonuses at the end of last year.

Last year, Advance Local laid off 22 Plain Dealer staffers, essentially gutting the newsroom, according to a May 2020 article in Columbia Journalism Review.

Another 10 reporters accepted layoffs when told they would be moved to out-county beats, and four relocated to cleveland.com, the article noted.

The Columbia Journalism Review writes: “Advance positions Cleveland.com as a separate media entity, though stories from both newsrooms have always appeared on the same site and print paper.”

Advance Local does not see any ethical issue in accepting PPP loans and its co-president Matt Kraner says its news operation will remain independent.

“We are grateful that Congress recognizes the importance local news has in fortifying democracy and strengthening and empowering communities of all sizes across our country,” Advance Local CEO Caroline Harrison says in an email sent to staff on Friday, according to cleveland.com. “In fact, it is the reason we exist.”