Hollywood.com Bans Use Of Paparazzi Photos Without Celebrity Permission 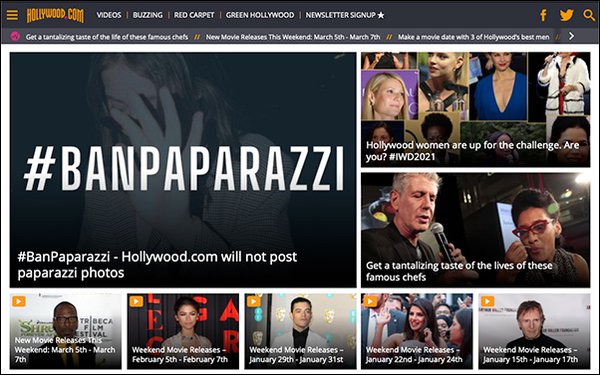 Digital publisher Hollywood.com will no longer use photos paparazzi photos of celebrities — without the celebrities’ permission.

The site claims to be the first to take such action, but that could not be independently verified at press time.

Either way, the move reflects the ethical and personal concerns raised by paparazzi, who have themselves become celebrities in some cases and continue to have numerous tabloids and other outlets.

"Many paparazzi have a long and well-documented history of aggressive harassment and provocation toward celebrities and public figures to the point of destroying — and in some cases — ending the lives of the very people they are following," states Heather Ata, CMO at Hollywood.com.

"We recognized that, as an entertainment news publisher, we had a choice — and we've decided enough is enough so we're taking a stand. We hope other entertainment news and media companies around the globe will find the courage to do the same and join us in our move to #BanPaparazzi photos taken without consent of the celebrity,” adds Ata.

Assuming this stance catches on, it is unclear if private citizens will receive the same level of consideration when photos of them are used.

Ata argues there are "a lot of great conversations around the concept of consent in recent years since the #MeToo movement. The notion of consent is key here, too — and should apply to paparazzi because what they are doing is just another form of assault.

"The lack of consent inherent in the motivations of the paparazzi is something that needs to be examined and recognized for what it is: a complete lack of respect for the boundaries and private lives of celebrities, their families and their loved ones. Members of the paparazzi should not be rewarded anymore for their behavior," she said.