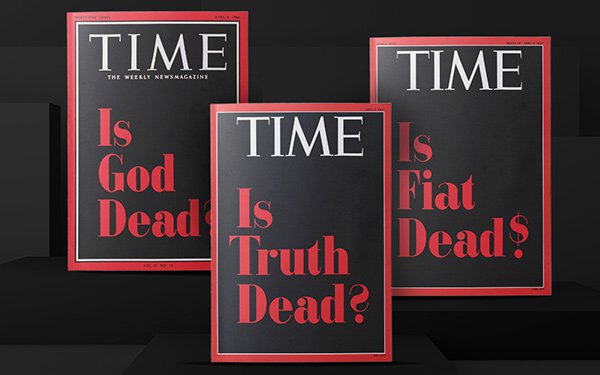 Readers were shocked in 1966 when Time magazine featured a cover asking: “Is God dead?”

Three covers using that formula are now being offered at auction in a manner that may be just as shocking to monetary purists: as non-fungible tokens (NFTs) on the cryptocurrency marketplace SuperRare. The other headlines are: “Is Truth Dead?” And “Is Fiat Dead?”

They are a “subset of cryptocurrency,” says Brian Georgi, CRO at Boostr. However, unlike bitcoin, NFTs “store extra information that are unique in both substance and value,” Georgi adds. “As a result, one couldn't simply trade them at 1:1 value like one could with a standard dollar. “

Described by some as "digital collectibles," NFTs can also be created for music, artwork or video, Georgi adds.

“Publishers can leverage NFTs to create exclusive opportunities that can be sold to advertisers or directly to the public via auction, which was the case with the 'Is Fiat Dead?' Time cover,” Georgi says. “Early movers like Quartz and Time are laying the groundwork for a brand-new revenue stream that could revolutionize the way we conceive digital media."

Time’s “Is God Dead?” cover, the first as text-only, highlighted a thoughtful article by religion editor John Elson on one of the great existential questions.

“It is a question that tantalizes both believers, who perhaps secretly fear that he is, and atheists, who possibly suspect the answer is no,” Elson wrote.

Predictably, the cover inspired “countless angry sermons, 3,421 letters from readers and a lively debate at a time when 97% of Americans told pollsters they believed in God,” Time writes. Bob Dylan famously said: “How would you like it if you were God and you read that about yourself?”

The next cover in that vein was “Is Truth Dead?” in April 2017. “Just like many said they believed in God in 1966, many today would say they believe in Truth, and yet we find ourselves having an intense debate over its role and power in the face of a President who treats it like a toy,” editor Nancy Gibbs wrote.

And Fiat? “Fiat money is government-issued currency that is not backed by a physical commodity, such as gold or silver, but rather by the government that issued it,” Time writes. “Crypto currencies, like Bitcoin and Dogecoin, are challenging that model.”