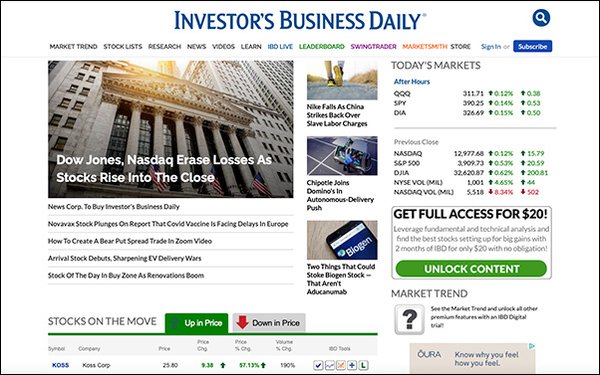 IBD will be run by Dow Jones, publisher of The Wall Street Journal, a News Corp. subsidiary.

Founded by William J. O’Neil in 1984, IBD has enjoyed double-digit revenue growth over the past several years. Digital accounts for 90% of IBD’s revenues and subscriptions. The majority of IBD’s revenues and profits come from the firm’s investor tools and its research and analysis products, News Corp. says.

O’Neill’s investment philosophy is the basis of IBD’s stock recommendations. He seeks seven common traits displayed in stocks just before they make their biggest gains.

Thomson adds: “We will be able to cross-sell and up-sell with Dow Jones financial products and provide specialist insights for a knowing business audience.”

IBD will be operated as a standalone brand, and its headquarters will remain Los Angeles. The publication has 130 employees.

It's unknown how this acquisition will affect the competitive picture in financial-reporting services.

Media analyst Geetha Ranganathan calls the purchase “a disciplined and logical move,” according to Bloomberg, which reports that IBD once ran a daily newspaper in an effort to compete with The Wall Street Journal.