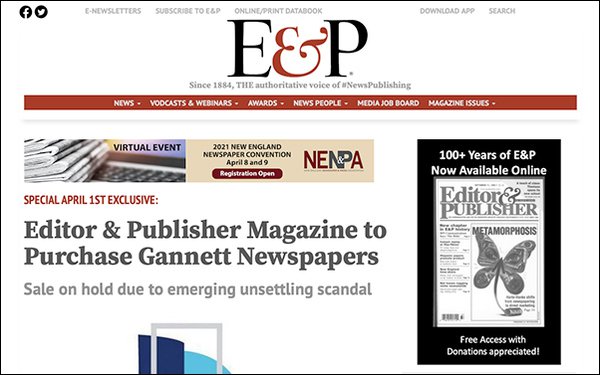 Editor & Publisher, departing from its usual serious reporting, ran a false story that it is acquiring the Gannett newspaper chain, apparently as an April Fool's joke.

The Thursday story probably confused some readers who were not focused on the date. They may not have questioned how a publication the size of E&P could acquire a chain with hundreds of newspapers.

“I really got excited and happy thinking a newspaper savior has come!” wrote one reader, Pam Carter.  “Then as I woke up and read further, I realized it was all an April Fool It.”

But another reader, Todd Bishop, commented: “This is truly awful. You should be setting an example for the industry. In no instance is it ever acceptable to fool your readers.”

However, almost all of the comments were positive, assuming they were all genuine.

Under an April 1st “exclusive” kicker, the headline stated: “Editor & Publisher Magazine to Purchase Gannett Newspapers,” followed by the deck: “Sale on hold due to emerging unsettling scandals.”

The story went on to say that E&P owner Mike Blinder “announced today that he was able to craft a deal” to acquire Gannett.

The new media conglomerate would be named BrickHouse Media, it continued. The tip-off should have been the section on the “scandal,” an affair being called Lombardi-Gate.