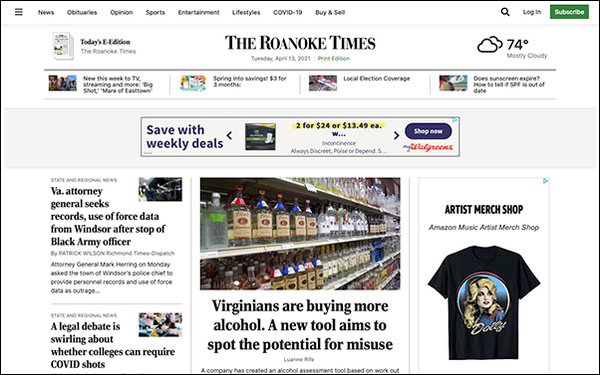 That represents over 20% of the unionized staff at the Southeastern Virginia daily, the Guild claims.

The newsroom staff has been cut by more than 25% since Lee Enterprises acquired the title in early 2020, it says. Roanoke Times investigative reporter Alison Graham, the Guild’s vice chair, blasted the move.

“These layoffs mark another difficult day for The Roanoke Times and its continued survival in Southwest Virginia,” Graham said, according to the Guild. "Our corporate owners have once again put short-sighted profit goals over both long-term solutions and the newspaper’s mission to deliver vital local news.”

In a related development, TheRoanoke Times building, home to the paper for over 70 years, has been put up for sale, the paper reports. The property is listed for $6.07 million.

Lee is now active in 77 markets. Last year, it acquired 31 daily newspapers from Berkshire Hathaway for a reported $140 million, and since then, it has reduced costs by $104 million. That includes newsroom layoffs, according to reports.

Last week, Lee announced a digital growth strategy as it prepared to move its stock listing from the New York Stock Exchange to the Nasdaq Global Select Market. Among other things, the company plans to invest in creating a cohesive experience across all of its platforms.