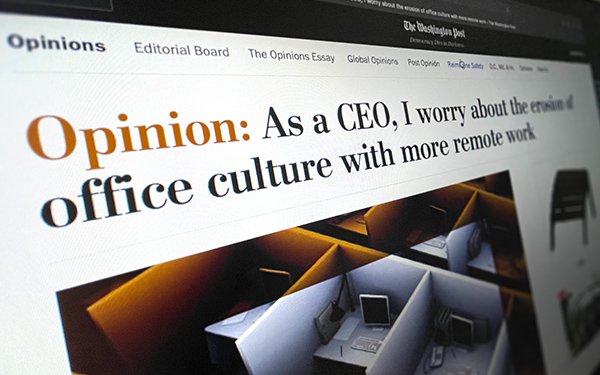 Washingtonian magazine staffers refused to publish on Friday after their CEO published an article that took a threatening tone about staffers who prefer to work at home.

The offending article, which appeared in the Washington Post on Thursday, was written by Washingtonian CEO Cathy Merrill. In it, she argued that employees who choose to continue at home following the pandemic could be downgraded to the status of contractors or have their jobs eliminated.

Merrill subsequently apologized and said she values all employees. But her editors had taken the implied threat to heart.

“As members of the Washingtonian editorial staff, we want our CEO to understand the risks of not valuing our labor,” Jane Recker wrote on Twitter. “We are dismayed by Cathy Merrill’s public threat to our livelihoods. We will not be publishing today.” 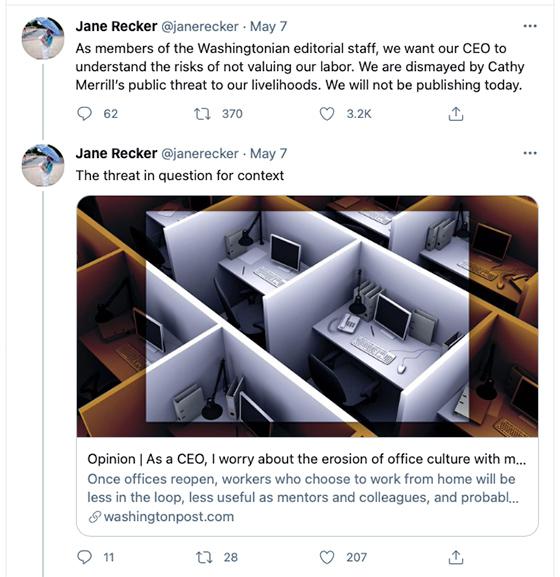 She added that “about 20 percent of every office job is outside one’s core responsibilities — ‘extra.’ It involves helping a colleague, mentoring more junior people, celebrating someone’s birthday — things that drive office culture. If the employee is rarely around to participate in those extras, management has a strong incentive to change their status to 'contractor.'”

This means that, instead of receiving a set salary, “contractors are paid only for the work they do, either hourly or by appropriate output metrics,” Merrill continued. “That would also mean not having to pay for health care, a 401(k) match and our share of FICA and Medicare taxes — benefits that in my company’s case add up roughly to an extra 15 percent of compensation.”

The lengthy headline, “As a CEO, I want my employees to understand the risks of not returning to work in the office” — was softened to: “As a CEO, I worry about the erosion of office culture with more remote work,” according to The New York Times.

But older workers in particular might have come away feeling that their jobs were on the line.

“Anecdotally, I’ve heard from many CEOs that their older, more senior employees — working from comfortable homes and happy to be relieved of commuting — are more reluctant to go back to the office than their younger colleagues, many of whom have been working from small apartments or their parents’ homes,” Merrill wrote.

Companies of all types are facing a challenge to traditional working arrangements, but young employees are apparently eager to return to the office, at least part of the time. A recent survey by Brooklyn Chatter and Macias PR found that 53.6% of Gen Z workers want to split their time between the office and remote locations, and that 28.3% want to work in the office full-time. Only 2.5% want to work remotely full-time.”