'The Appeal' Recognizes New Union, Pulls Back From Layoffs 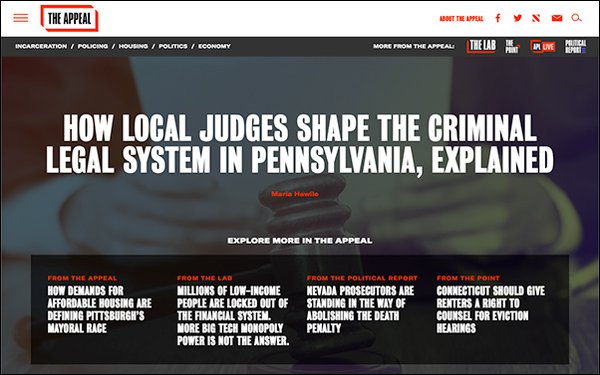 The Appeal, a nonprofit site that covers criminal-justice reform, has halted a plan — at least for now — to lay off employees.

The organization has also agreed to recognize the staff’s new union: The Appeal Union.

The news came a day after NiemanLab reported layoffs were announced within five minutes of the union proclaiming its existence on Monday.

Rob Smith, The Appeal’s executive director, wrote on Monday that the nonprofit was spinning off from Tides Advocate and Tides Center to become an independent nonprofit organization. As part of this move, “we have made the difficult decision to significantly reduce the size of our team.”

Smith added the cuts would start at the top of the “top-heavy organization.”

“Accordingly, I am stepping back as executive director, and taking on a part-time role as Founder & Senior Advisor. Jake Sussman and Alex Bassos are leaving their full-time roles the organization, as well.”

The union said the announced cuts were retaliatory, but is now looking forward to positive labor relations with The Appeal.

In announcing the change, the union said The Appeal “tried to lay off almost a third of our unit. Today, management said they will recognize our union and pause layoffs.”

One employee, Ethan Corey, wrote on Monday that he and several other colleagues had been laid off from their jobs.

On Thursday, Corey wrote: “After a very eventful 30 hours on the job market, I’m thrilled to say that The Appeal union won me my job back at The Appeal.”
employment, online publishing, publishing
Next story loading