'The Economist' Rolls Out Its First Online Course 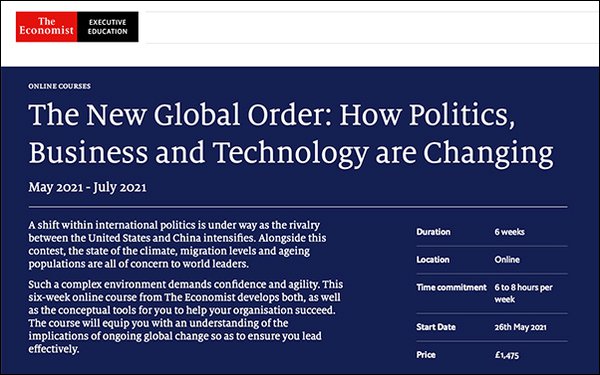 The first course, “The New Global Order: How politics, business and technology are changing,” lasts for six weeks and will require a commitment of six to eight hours per week. The cost is £1,475 ($2,087).

The program created by Economist journalists and features experts from a variety of disciplines and place, including Kevin Rudd, former Prime Minister of Australia, and Eric Schmidt, former CEO of Google.

“A shift within international politics is under way as the rivalry between the United States and China intensifies,” it says on the page promoting the course. “Alongside this contest, the state of the climate, migration levels and ageing populations are all of concern to world leaders.”

The course will help participants develop the confidence and agility they need to cope with these developments. Interested professionals have until June 2 to register.

The Economist is collaborating with GetSmarter to develop the online courses.

The second course, which starts in the autumn, is on business writing.

For instance, WWD has launched a program called Fashion Business Essentials, collaborating with The School of Fashion at The New School’s Parsons School of Design and education platform Yellowbrick.