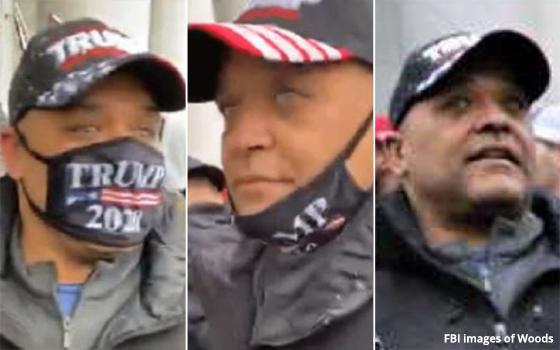 U.S. prosecutors have filed their first charges for the assault of a member of the news media during the Jan. 6 breach of the U.S. Capitol.

Shane Allen Woods, of Auburn, Illinois, has also been accused of assaulting a police officer during the attack.

In addition, Woods has been charged with assault in special maritime and territorial jurisdiction, and with engaging in physical violence in a restricted building or grounds.

According to court documents, Woods was in a crowd of protesters located on the lower west terrace in the Northwest corner of the Capitol that afternoon.

As a U.S. Capital Police officer tried to pursue an individual who sprayed bear mace at police, Woods ran toward the officer, tripped her and shoved her to the ground, they allege.

Later, Woods gathered in the vicinity of the media staging area where protestors were yelling and spitting at members of the news media.

As depicted in videos and images that were posted, Woods tossed some of the piled media equipment. Woods then allegedly tackled the cameraman and caused him to fall and drop his camera, prosecutors alleged.

Attorney General Merrick Garland stated on Thursday: “This morning, we arrested our first defendant on charges that include assaulting a member of the news media.”

MediaPost was unable to obtain a comment from Woods at deadline.

To date, approximately 465 suspects have been arrested on charges pertaining to the breach