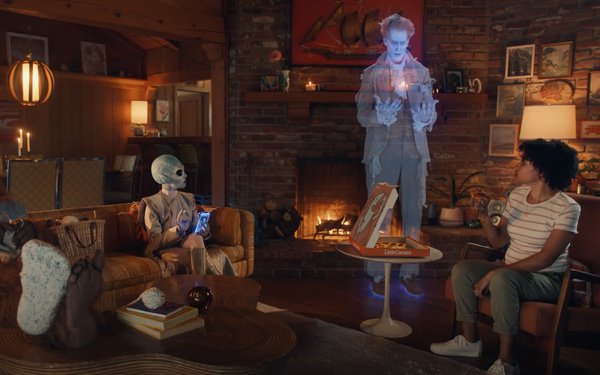 Little Caesars is introducing plant-based pepperoni this week as a pizza topping at hundreds of its U.S. locations, accompanied by a campaign designed to win over skeptics of plant-based foods.

As with other plant-based food offerings, a major hurdle to consumer trial and adoption is taste.

Hence the “You Better Be-leaf It” campaign from the 160over90 agency, featuring a woman extolling the “flavorable” virtues of plant-based pepperoni atop a slice of pizza to a trio of skeptics. But those who say good-tasting plant-based pepperoni “can’t be real” aren’t exactly real themselves: an alien, a ghost and Bigfoot.

The campaign is "built around the insight that people are disbelievers of great-tasting, plant-based food. So we’re asking people to suspend their disbelief,” Jaime Pescia, Little Caesars director of global brand and creative, tells Marketing Daily.

The privately held Little Caesars didn’t specify how many of its stores are offering planteroni, but identified the debut markets as Detroit, Los Angeles, Miami, New York City, Portland, Oregon and San Francisco.

Part of the market selection process was based on the areas’ “big adoption” of plant-based foods, according to Pescia. Little Caesars conducted consumer taste tests in conjunction with Field Roast and Greenleaf.

“We saw overwhelmingly that the majority of the people would really try a plant-based meat product if given the opportunity,” says Pescia.

The chain is targeting a broad audience beyond flexitarians and vegetarians. “People love pizza, but most groups of people argue about the toppings they put on their pizza. Now pepperoni on your pizza is acceptable to everyone and can help with those household arguments,” Pescia adds.

The campaign video is running on digital media platforms and during sports games on local television in Detroit.