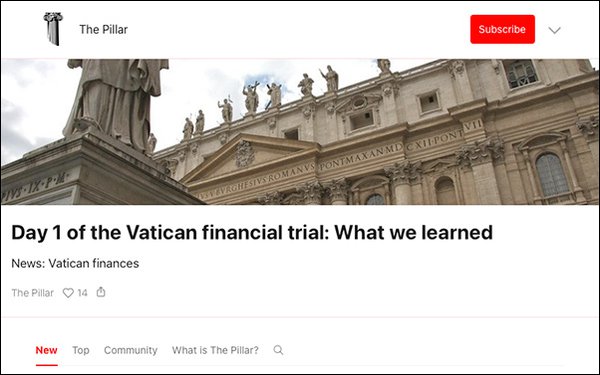 The Pillar, an independent publication that covers the Roman Catholic Church, has been criticized by The National Catholic Reporter (NCR), another independent title, for alleged breaches of journalistic ethics.

The flap concerns an article by The Pillar, alleging that Msgr. Jeffrey Burrill had engaged in “serial sexual misconduct,” including going to gay bars and using Grindr, the sex-and-dating phone app.

In the church or out of it, The Pillar expose raises questions about journalistic practice.

The problem is that the article was based on an analysis of app data signals The Pillar states were "correlated to Burrill's mobile device," NCR charges.

Todd Gitlin, a professor of journalism at Columbia Journalism School, tells NCR: “Ethically, this is a softball. The article is scummy. The hack using data tracking is illicit, indefensible, and all-around contrary to journalistic ethics."

Gitlin said the practice is “redolent of the depredations of [Rupert] Murdoch's News of the World busting into private phones.” He added that "sneering references to pedophilia” in the article are “nothing short of vile and McCarthyite. Roy Cohn would be proud."

The Pillar article stated there was no evidence the priest had contact with minors, but then made “the problematic leap” that possible consensual behavior could cloud the priest’s judgment on handling clergy sexual abuse cases, NCR contends.

"A good editor would have sussed out these issues, and likely eliminated the many references to unrelated cases that give the patina of criminal behavior to a situation that lacks evidence of such conduct," Bill Grueskin, a professor of professional practice at Columbia Journalism School, tells NCR.

“After we obtained and authenticated a dataset, most of our analytic work with that set has been to identify patterns and trends in the context of the Catholic Church, which we cover, and in which technology accountability has been an issue of importance among church leaders for quite some time.”

Flynn continued: “We discovered an obvious correlation between hookup app usage and a high-ranking public figure who was responsible in a direct way for the development and oversight of policies addressing clerical accountability with regard to the Church’s approach to sexual morality.

“There is no indication, at all, that the leader in question was using the app for any purpose pertaining to minors, and we would not wish to insinuate anything to the contrary,” he added, nothing The Pillar had extensive off-the-record conversations with church authorities.