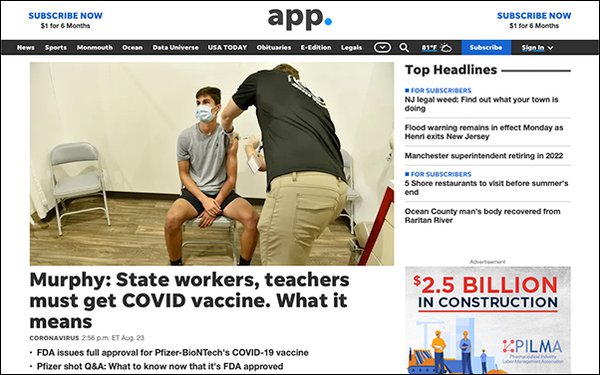 “Our newsrooms have served our communities for over a century, and by forming the APP-MCJ Guild, we are ensuring our journalists are given the necessary means to serve for the next 100 years,” states Ryan Ross, on-air host and visual journalist for the Asbury Park Press.

“We respect the right of employees at Asbury Park Press, the Courier News and the Home News Tribune to make a fully informed choice for themselves whether to unionize or not to unionize,” says Thomas C. Zipfel, Gannett's labor relations counsel.

“Gannett strongly supports the National Labor Relations Board’s (NLRB) election process and has always participated in that process fairly and in good faith. Central to that process is a democratic election in which every employee’s voice is heard,” says Zipfel.

The development comes as newsrooms are increasingly restive under the management of large companies that stress the bottom line.

“We should not be living a life based on the daily mantra ‘be grateful you have a job,’ repeated and reinforced by upper management,” states Cheryl Makin a reporter for the Courier News. “We should be working in an environment of professional respect — shown through quality benefits, policies and salaries.”

Four other newspapers in Gannett’s Atlantic Region voted to unionize in May: The Bergen Record, NJ Herald and Daily Record.

The NewsGuild of New York filed an Unfair Labor Practice charge with the National Labor Relations Board over alleged union-busting actions by Gannett. These actions included offering benefits in exchange for rejecting the union, the NewGuild charges.

In other Gannett news, Phillips Media Group announced it is acquiring five local publications in Arkansas and Missouri from Gannett: Baxter Bulletin, The Big Nickel, the Rolla Daily News, the Kirksville Daily Express and the NEMO Trader. The deal is expected to close on Sept. 1.
employment, newspapers
Next story loading