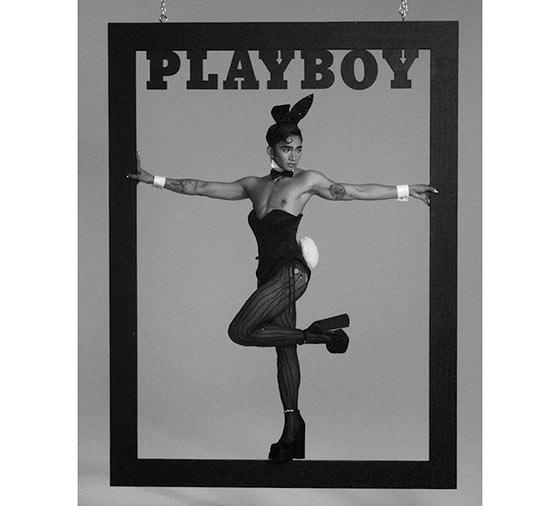 The social-media influencer Bretman Rock has become the first gay man to appear on the cover of Playboy, the 68-year-old icon that eliminated U.S. print editions last year.

The magazine teased the event in a series of tweets: “It’s Bretman, bitch,” in one, and calling Rock “Da Baddest Bunny” in a retweet of Rock in another. Rock posted on both Instagram, where he has nearly 18 million followers, and Twitter. "I'm a BUNNY duh!!"

Rock, a 23-year-old Filipino American who lives in Hawaii, rose to fame as a creator on YouTube and Vine. He’s known for making makeup tutorials and his humorous views on life. In 2021, Rock starred in his own reality TV show titled “MTV Following: Bretman Rock,” which showcased a closer look into his family life. He has received multiple awards and honors, including "Breakthrough Social Star" at the 2021 MTV Movie and TV Awards.

In addition to being the first openly gay man on the cover, he’s only the third man to appear on the cover of what was for decades known as a “men’s sophisticate” magazine, a euphemism for a magazine that features female nudity. The others were the magazine's late founder, Hugh Hefner and the Latin pop star Bad Bunny last year.

Playboy briefly eliminated nudity in 2016, only to bring it back the next year, calling the decision a “mistake. I'll be the first to admit the way in which the magazine portrayed nudity was dated,” Chief Creative Officer Cooper Hefner said at the time.

The magazine, printed monthly as recently as 2017, has suffered a long decline from a circulation peak of more than 5 million copies in the 1970s. CEO Ben Kohn announced it was eliminating print last year and adopting a digital-first publishing model with some print special issues.

With this latest first, Playboy succeeded in making news. In one of its Twitter posts, the brand shared a quote from Rock. “For Playboy to have a male on the cover is a huge deal for the LGBT community, for my brown people community and it’s all so surreal,”  Rock said. “A total ‘is this even f------- happening right now?’ type of vibe. And I’m so pretty.”