'Misinformer Of The Year:' Steve Bannon 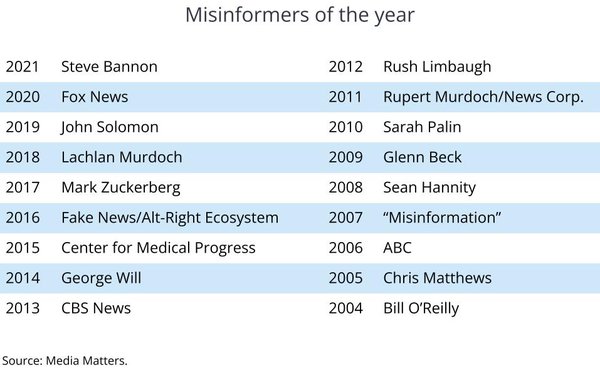 Steve Bannon has been named the 2021 “Misinformer of the Year” but nonprofit media watchdog Media Matters for America.

He succeeds 2020 Misinformer of the Year Fox News Channel, in what is the 18th year that Media Matters has bestowed its recognition of “the most influential or prolific purveyor of misinformation likes and smears in the U.S. media.”

Unlike past recipients, which Media Matters said have “sought to influence public opinion with lies and smears, Bannon is also weaponizing his audience by directing them to carry out his anti-democratic goals.

“Bannon is a driving force of the most toxic elements of the right, platforming the most radical GOP figures, and — most importantly — that he has become the essential nexus between the right-wing media ecosystem and the GOP,” the watchdog said in a statement announcing Bannon’s award.

Through his “War Room” podcast, which Media Matters noted is “platformed by both Apple and Google and airs 17 hours of content per week, Bannon stokes American anger with deliberate and dangerous lies.”