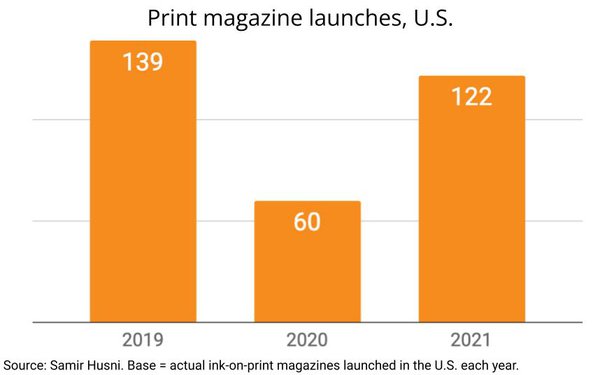 There were 122 new print-magazine launches in 2021, representing a sharp rebound from the 60 that launched last year, and offering hope that print media has a strong — though admittedly more boutique — future, according to Samir Husni, perhaps the world’s foremost expert and advocate for ink-on-paper magazines.

The new launches are overwhelmingly niche-oriented, with low frequencies — quarterly or bimonthly — Husni reported, based on his proprietary tracking method. Husni has been tracking magazine launches annually for 43 years, and this year’s 122 magazines are close to 2019’s 139 and 2017’s 124.

But all three of the recent tallies are far from the industry’s last golden era, in the early days of the commercial internet. In 2000, there were 333 new launches. In 2003, there were 454, and in 2004 Husni’s tally recorded a record number of new launches, with 473.

“It’s the spirit and the need for print,” said Husni, widely known as Mr. Magazine. “It’s showing that people are sick and tired of the virtual life — print magazines are something to hold, something to feel close to. There’s nothing closer in media than owning and feeling a paper magazine in your hands.”

Even Bitcoin Magazine, which covers cryptocurrency, relaunched in print following a five-year hiatus and offered 27 reasons why it’s back in print, Husni noted.

Husni compiled a list of the 21 most notable launches and relaunches of 2021, in each case indicating the new title’s frequency. In alphabetical order:

Husni selected three standouts that he named as launch, relaunch and reinvention of the year. Grazia USA, the launch of the year, is an American version of the 83-year-old Italian fashion bible. It launched in print in September with a staggering 400-page folio.

Grazia USA’s parent company is New York City-based Pantheon Media Group, headed by Dylan Howard, the former content chief at American Media. Howard may be best known as the former editor of the National Enquirer, where he allegedly engaged in “catch-and-kill” stories, in which the Enquirer would pay for exclusives of scandal stories and then bury them.

Bitcoin Magazine is the relaunch of the year, and the reinvention of the year is Scout Life, formerly known as Boy’s Life, the 110-year-old publication of the Boy Scouts of America. Scout Life is aimed at both boys and girls.

When it comes to the business model, most of these new magazines have common characteristics. They have smaller frequencies, they rely on circulation revenue, they have high cover prices, and they are printed on high-quality paper.

They probably need all four elements to survive.

Print-magazine economics have been acutely distressed for at least a decade. The old magazine newsstand collapsed. Advertising migrated online, especially to Google and Facebook. Readership dwindled. Bookazines have flooded the checkout pockets, leaving no place for new magazines to be distributed — for every new magazine coming to the market, there are 10 bookazines, Husni said.

As a result, new magazines are mostly distributed in bookstores and boutique locations, and have become sort of luxury items. “The new print magazines are becoming more like a collector’s product,” Husni said. “They’re the only thing left in media that’s not disposable. We used to say that about newspapers. There’s nothing more disposable than digital media.”

Interestingly — perhaps oddly — Husni found 14 sex magazines among his 122 launches. “That category almost disappeared in the last 10 years,” Husni said. “One of the publishers told me" 'People want privacy.’”

Here is Husni’s list of new launches by category, in alphabet order:

In the end, Husni’s optimism for the print-magazine format is undiminished. “The thing that gives me hope is the numbers have doubled since last year,” he said. "And to have a 400-page first-issue magazine in 2021 rekindles your faith that there is still hope. It’s not over.”