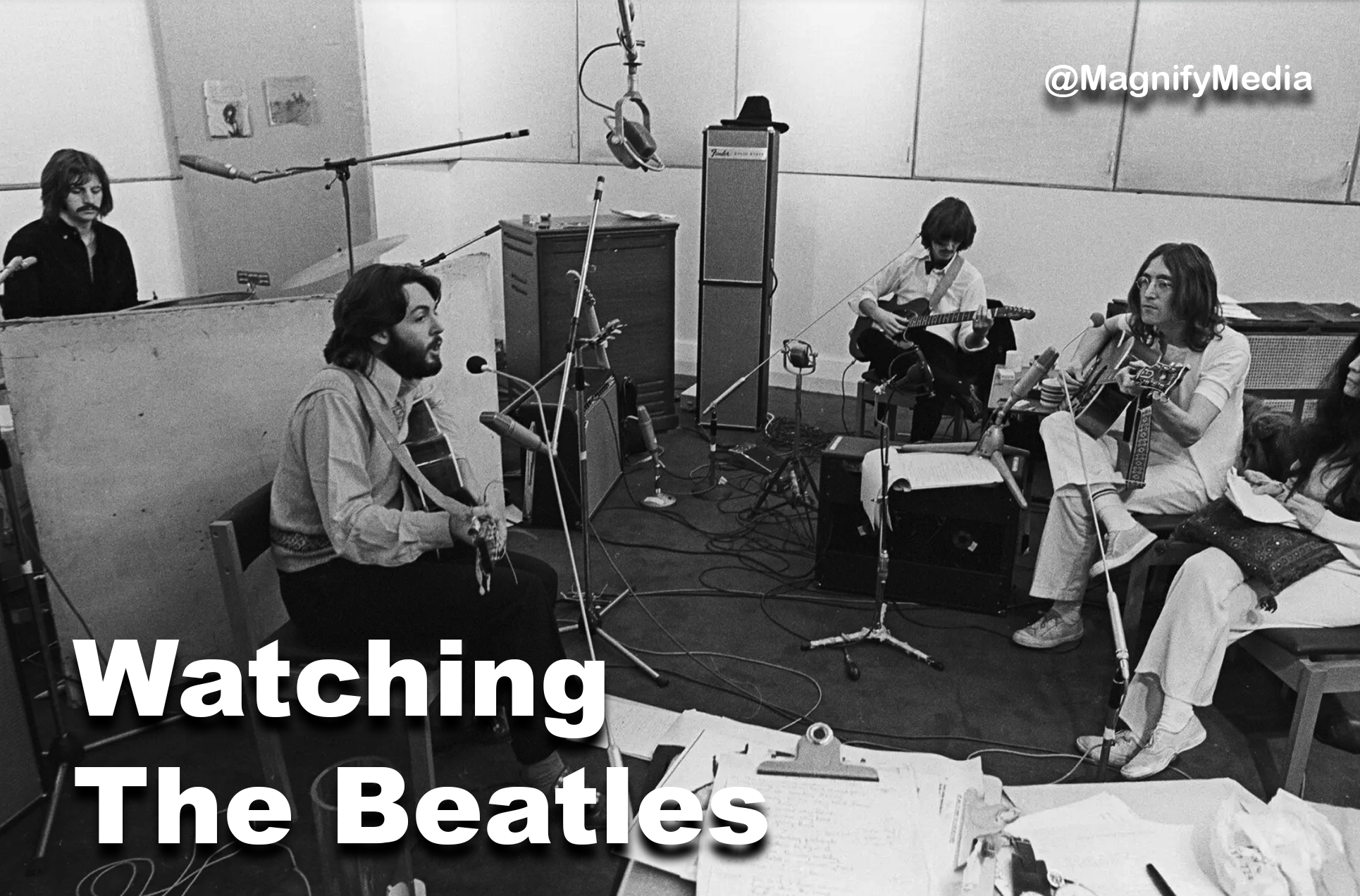 In Peter Jackson's documentary “The Beatles: Get Back,” we're able to experience the human complexity of making music. The film assembles cinema verite footage as the band tries at first to put together 14 new songs for a TV special that evolves under pressure.  Dates are set and missed, the studio special changes to a live concert, and then, as the band can't agree on a location, they end up going up onto the roof of the Apple offices on Saville Row.

It's a surprisingly shy and yet selfish solution, performing literally above the heads of the Londoners below. There was no social media back in 1969, so the word of the Beatles performing live after an almost two-year hiatus remains a public yet secret performance.

People on the street look up and hear the Beatles' songs bouncing off the buildings. While we know the tunes, for the people on street, these new songs aren't familiar, so it's pretty much a creative puzzle that's hard to decipher.

Fans on the street couldn't know that the band would break up for good within a year, but the documentary series offers some creative clarity as to what made the Beatles great -- and, at the same time, shows pressures that make clear that the group was heading toward a breakup.

The film presents 21 days culled from an archive of 60 hours of footage held by Apple Corp. One can imagine the decision to release the footage was complicated and political. Executive producers on the film included Paul McCartney, Ringo Starr, Yoko Ono and Olivia Harrison, as well as music supervisor Giles Martin, son of George Martin and a regular producer of Beatles projects since 2006.

Jackson spent close to four years editing the series. Paul said of the film: "I am really happy that Peter has delved into our archives to make a film that shows the truth about the Beatles recording together,” while Ringo echoed: "There was hours and hours of us just laughing and playing music. There was a lot of joy, and I think Peter will show that."

But those quotes were released before the film was completed. Later, seeing their foibles and creative conflicts exposed, the subjects of the film had an interesting response.

Peter Jackson showed the film to Paul and Ringo. Jackson told NME, "When they got to see the finished thing, I was expecting notes. It would've just been normal to get a note saying: 'Oh, that bit where I say that – could you cut that out?' Or 'could you shorten the conversation there?' And I didn't get a single note. One of them said that they watched it and found it one of the most stressful experiences of their entire life. 'But I'm not gonna give you any notes.'"

Interestingly, it was Disney who asked for cuts. Explained Jackson, "Disney wanted to remove all the swearing and Ringo, Paul and Olivia said: 'That's how we spoke. That's how we talked. That's how we want the world to see us.'"

An 8-hour documentary is an extraordinary thing, as is being able to feel like you're in the room, watching as the words and music to “Get Back” are noodled, enjoyed, and explored. It's a generous way give a new generation of Beatles fans unique insights on how the magic of musical composition takes place. "Get back," sings Paul. "Get back to where you once belonged."