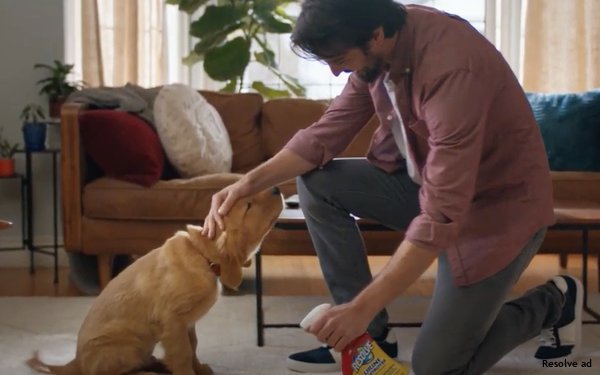 Resolve, Lindt and Cheetos ran the most “likeable” television ads in 2021 in all categories, while commercials for Popeyes, Pizza Hut and Domino’s were tops in QSR likeability scores, according to a report from iSpot.tv.

Overall, CPG was the most-seen industry on TV last year, with total spending of $6.3 billion generating 1.5 trillion total impressions. That represented a spending decline of 7.4% compared to 2020, according to iSpot.

Under iSpot.tv’s methodology for determining likeability, every ad is shown to a unique set of 500 respondents who complete standardized surveys, generating 20,000 data points per ad for creative assessment.

The commercial for Resolve carpet cleaner titled “You Said You’d Never” is a reference to a man’s resolve to never own a dog—until he does so. The pooch proceeds to pee on a carpet, join the man on a couch and cuddle with him and a female bedmate. The couple then acquires another canine.

Lindt’s spot for Lindor chocolate truffles was part of the brand’s “Melt Into Holiday Moments” campaign. It featured a chocolatier preparing the sweets—which are then shared at an in-home gathering. “Product-forward visuals successfully enticed viewers—with a whopping 70% reporting increased purchase intent,” the iSpot report concludes.

“At the same time, the creative evoked a sense of nostalgia with wholesome messaging about enjoying the holidays with family and friends.”

Cheetos paired actors and spouses Ashton Kutcher and Mila Kunis with the singer Shaggy for its 2021 Super Bowl spot dubbed “It Wasn’t Me.” Kunis sings the song of the same name popularized by Shaggy while trying to deny that she is responsible for a trail of cheese dust in their home.

According to iSpot, it was the funniest of all Super Bowl ads last year.

This “Lots Of Ways To Love That Chicken From Popeyes” commercial generated a likeability score of 771—placing it in the 99th percentile—and had a positive purchase intent of 74%. It had no actors, just food images and a voiceover.

Actor Craig Robinson sang a variation of “The Twelve Days Of Christmas” to herald Pizza Hut’s Triple Box Treat: five breadsticks, two pizzas and 10 Cinnabon rolls. “Viewers successfully identified Pizza Hut as the advertiser thanks to festive branding, while the deal and products portrayed successfully drove desire,” according to iSpot.

Competitor Domino’s touted its ability to guarantee car-side delivery in less than two minutes by showing an employee battling rain, snow, wind and a barrage of wild animals to make the deadline.

“This spot clearly communicated an enticing offer in an entertaining way that did not overshadow or overcomplicate the information,” according to iSpot.