Arby's Aims To Set Your Mouth On Fire With TikTok Challenge 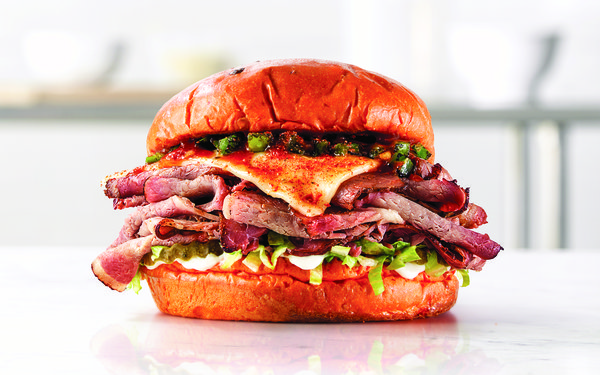 Arby’s is playing with fire, introducing a special-edition sandwich so spicy it requires a rescue milkshake.

Called the Diablo Dare, the new sandwich is built from either 13-hour smoked brisket or crispy chicken, then doctored with five sources of spice, including ghost pepper jack cheese, fiery hot seasoning, fire-roasted jalapeños and Diablo BBQ sauce, all heaped on a red chipotle bun.

The limited-time offer comes with a free snack-sized vanilla milkshake to help quench the flames.

Arby’s, owned by Inspire Brands, has built its rep on over-the-top creations. This is, after all, the brand that recently introduced the Curly Fry Spicy Bloody Mary and the Meat Mountain Sandwich.

Arby’s says it decided to create the new sandwich after it found many consumers don’t think the “spicy” options on most fast-food menus are nearly spicy enough.

“This is not a sandwich for the faint of heart,” says Patrick Schwing, the company’s chief marketing officer, in its announcement. “Everyone in QSR says they have a spicy option, but our research tells us that consumers are disappointed by fast food claims of spicy. We took that as a challenge by making sure all different types of spicy -- the hot, the numbing, and the lingering -- are combined to make the Diablo Dare a true test of how much heat you can handle.”

It is marketing the new offer with a Diablo Dare Hashtag Challenge on TikTok, which will allow people to use a branded effect filter to show how much they can take before reaching for their milkshake.

Like many QSR brands, Arby’s hopes to roll into the new year strong, even as Omicron, the latest COVID-19 variant, is slowing sales, slowing customer traffic and forcing closures of some units due to sick staff.

That’s a setback for the industry, which had been making gains. NPD Group reports that during the three-month period that ended in November, just before Omicron appeared in the U.S., certain aspects of the restaurant business had shown steady improvement.

Restaurant visits during breakfast, morning snack, and lunch dayparts–those most hit by people working and learning at home -- had shown increases. Breakfast visits, for example, improved 11% during those three months, compared to a 10% decline in the same period a year ago. Lunch visits rose 4% compared to a decrease of 11% a year ago. But that’s still some 7% below pre-pandemic levels.

David Tarantino, an analyst who follows the industry for Baird, predicts continued recovery for restaurants as Omicron decreases, even if gains aren’t as robust as they were in the last half of 2021.

“We think industry sales can be supported by pricing actions, a generally good economy (employment/wage growth), better execution/staffing levels (after pandemic- related disruptions throughout 2021), and a further normalization of consumer mobility/activity,” he writes in his latest note on the industry.

Still, those gains may be offset by “prospects for consumers to reallocate their spending amid general inflationary pressures and the return of other activities that suffered during 2020-2021.”