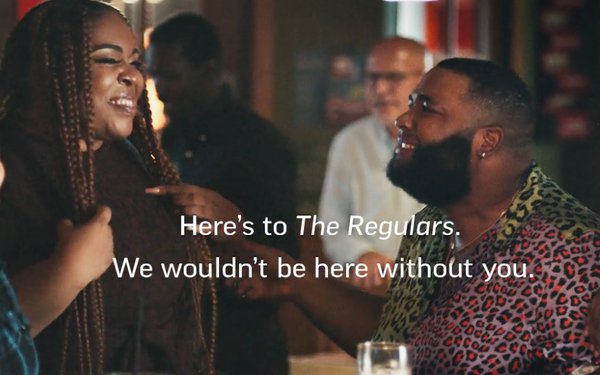 Casual-dining chain Applebee’s revisits its 1980s roots by serenading regular customers with the “Where Everybody Knows Your Name” theme song from that decade’s “Cheers” television sitcom.

Titled “The Regulars,” it’s the chain’s first ad campaign in which everyday diners—as opposed to menu items or special deals—are front and center.

As seen in this 60-second spot from Grey Advertising, those regulars include firefighters, local business owners, a girls’ softball team, families and a military veteran.

It’s a creative concept that Applebee’s has long contemplated, according to CMO Joel Yashinsky.

“We had talked about the fact that we have regulars in our restaurants, and wanted a way to identify, highlight and bring their stories to life,” Yashinsky tells Marketing Daily.

“So there’s always been this concept at a very high level—but it really came to fruition as we started to talk more about coming out of the virus back last summer and again this year.”

The campaign launched Jan. 9. Among other placements, commercials will run during this month’s National Football League playoffs and during prime-time programming.

The creative was shot in October, before the outbreak of the pandemic variant Omicron.

Last summer, Applebee’s adopted the “Fancy Like” theme in a partnership with musician Walker Hayes.

According to place-based data provider Placer.ai, foot traffic to Applebee’s restaurants in January of 2021 fell 36.9% compared to January of 2019.

In a Nov. 4 conference call to discuss financial results for the fiscal quarter ended Sept. 30, Applebee’s president John Cywinski said 73% of sales had been dine-in compared to 15% car-side delivery and 12% regular delivery.

“Dine-in guests have become even younger, while not surprisingly our boomer guests have shifted their behavior to more off-premise dining,” said Cywinski.

“At present, about 51% of Applebee's guests are under the age of 35—with millennials being our largest segment at 33%.”

Having first opened in 1980—two years before the debut of “Cheers”—the chain now has some 1,600 locations.