Is Ukraine President Sitcom Star -- Or The Leader The World Hopes He Is? 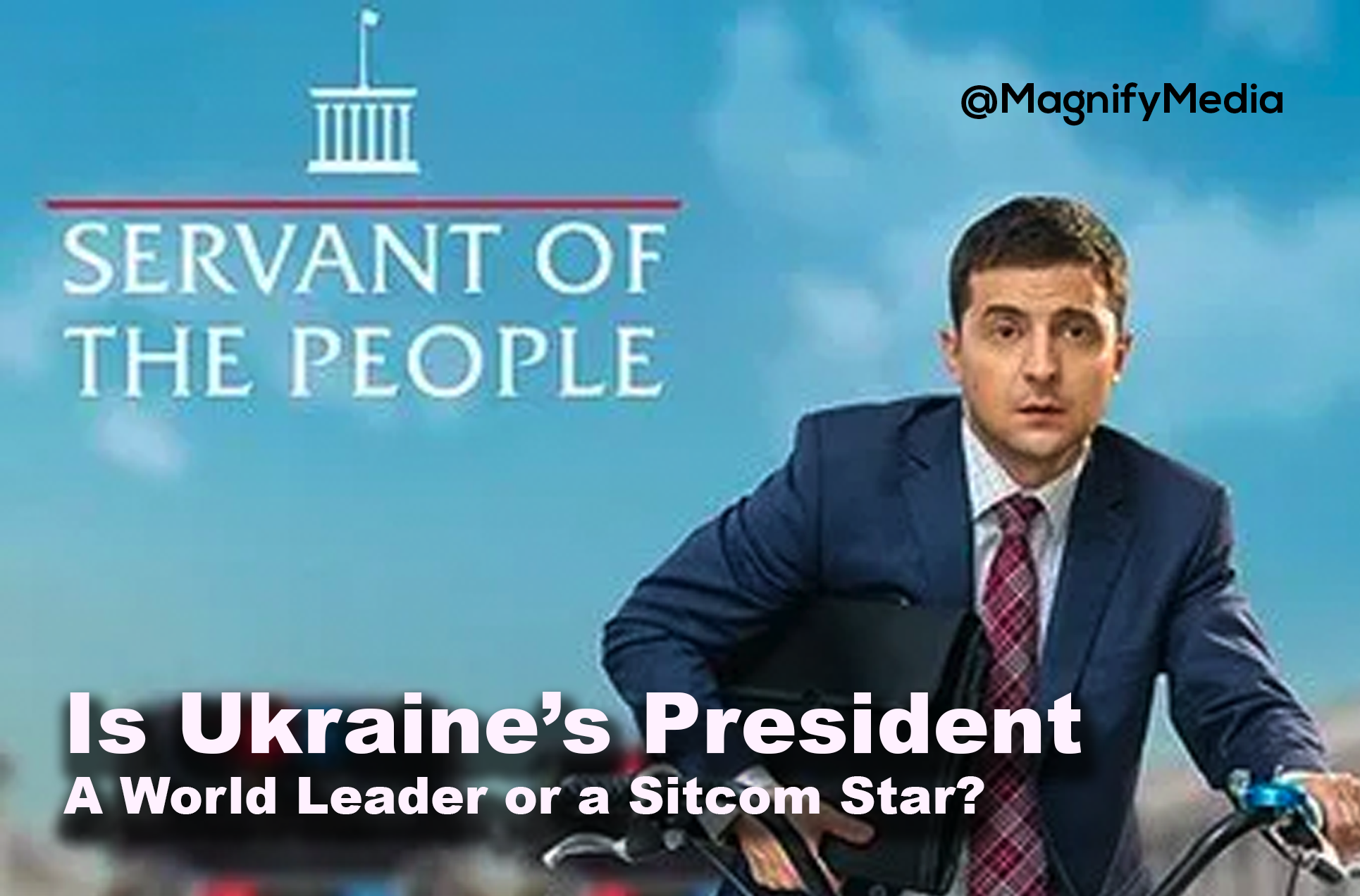 Let’s start with an important clarification: Classifying the Ukrainian president as a comedian is simplistic and dishonest. And despite Putin’s various attempts to label him as such, Volodymyr Zelensky is not a “Nazi.”

He’s Jewish and 44 years old. His parents are Rimma Zelenskaya, a former engineer, and Oleksandr Zelensky, a professor and head of the Kryvyi Rih Institute of Economics Department of Cybernetics and Computing Hardware. Zelensky graduated from Kyiv National Economic University in 2000 with a law degree.

And so, as a lawyer and the son of an engineer and a professor, he set out to make his mark on the world.  He found himself participating in comedy competitions, and then produced, wrote, and directed in 2015 a series called “Servant of the People.” It was a hit, and his rising star grew his popularity. If you haven’t yet watched the series, which was previously on Netflix, you should -- here’s a link to it on YouTube. It will probably be on another streaming service soon.

Here’s the show’s storyline, which is itself startling.

“Servant of the People” began in 2015, ran for three years, and ended in March 2019. It follows Vasyl Petrovych Holoborodko -- played by Zelensky -- a high school history teacher whose video ranting about the corrupt Ukraine political class goes viral. Then, almost overnight, he’s elected president, which may be prophetic -- except it’s not.

In the 2019 Ukrainian election, Zelensky ran for president, even as the comedy that he starred in was still on the air. He won (in real life) by a staggering 73% of the vote. The party he ran under was named after his show: The Servant of the People party.

It’s hard to believe this is all a grand coincidence. After all, he’s an attorney and the producer and writer of the show. He’s not an actor playing a role; he’s an activist masquerading as an actor. The show has a clear message of working-class solidarity, as Vasyl (the high school teacher turned president) goes up against the Ukrainian power structure, portrayed as shady oligarchs who use their power and money to try and pull the strings.

The show is funny, and even for a non-Ukrainian speaking person, the subtitles land the jokes enough to make the series entertaining -- even if the events going on in the real world and Zelensky’s now deadly battle with increasingly brutal Russian forces give the entire series a haunting sense that the media is the message here.

Keep in mind, this is the same Zelensky who was charmed, then bullied, and finally threatened by then-U.S. President Donald Trump. Zelensky was promised all the U.S. support he needed to prepare for what seems like the inevitable military advance of the massive Russian Army -- if Zelensky just launched an investigation into then-candidate Joe Biden and his son Hunter. No matter that Trump was then in a buddy-buddy relationship with Putin, and that Trump’s meetings with Putin were held in secret, with no members of the administration present to keep track of promises offered or deals made. And, in fact, Zelensky was able to sidestep Trump’s bribery.

So, here’s why this show matters now. All politicians are performers -- some better than others. Ronald Reagan came straight from Hollywood. Boris Johnson’s famously floppy hair signals his "everyman" sensibilities. And Donald Trump’s 15-year run on “The Apprentice” made his signature line “you’re fired” into a marketing message for a tough, no-nonsense approach to solving problems.

What we don’t know is when a politician’s TV performances are all there is, and when they’re the launch pad for a gifted leader to use the power of television -- and now social media -- to garner enough real political power to make sustainable social change.

In Ukraine, we’re witnessing a brutal testing of Zelensky as a wartime leader. And there’s nothing funny about that.

politics
4 comments about "Is Ukraine President Sitcom Star -- Or The Leader The World Hopes He Is?".
Check to receive email when comments are posted.
Read more comments >
Next story loading