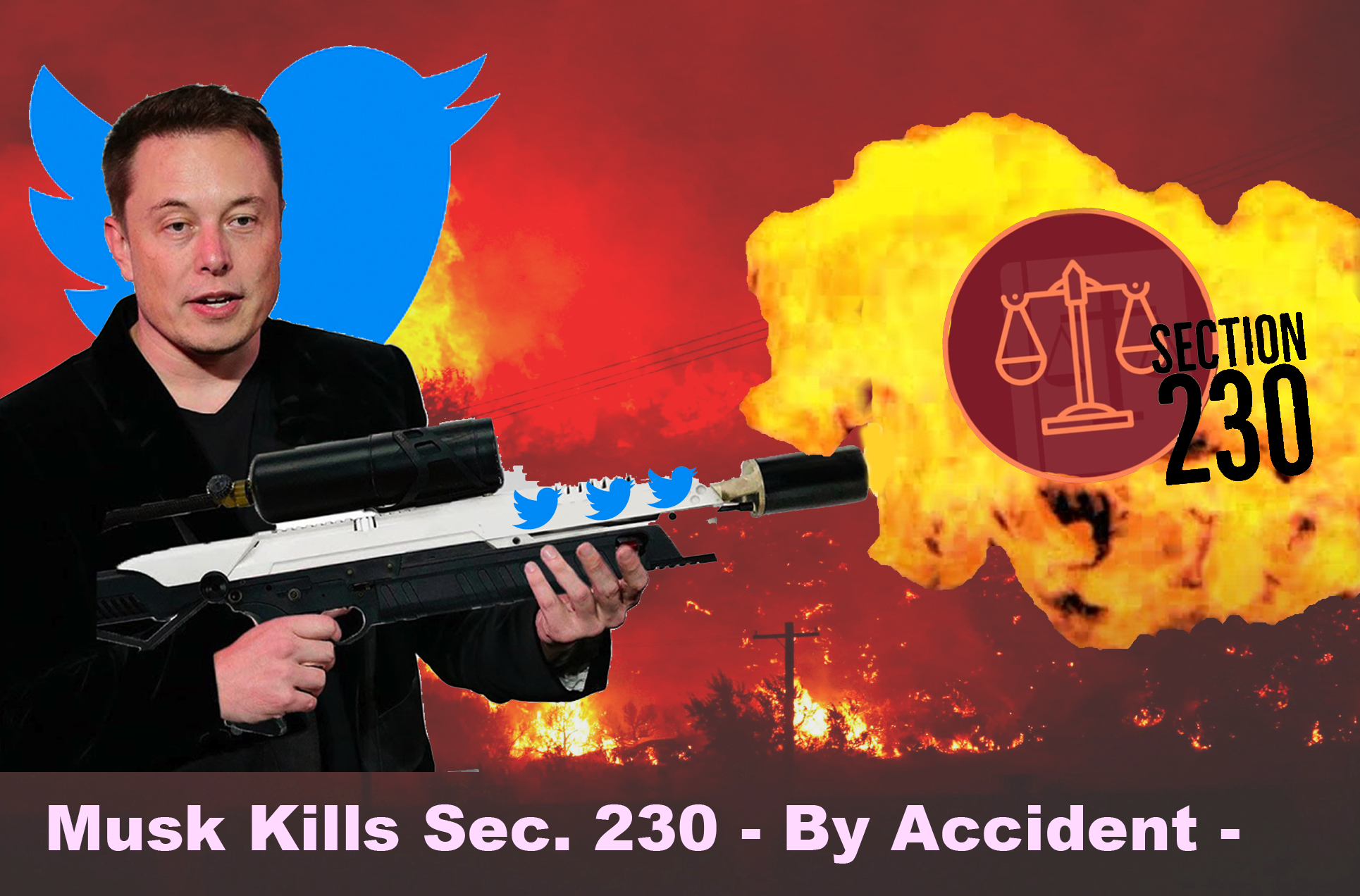 The power of the leading social networks is based on their unprecedented access to audience. The best measure of this access is monthly active users (MAUs). Facebook has 2.9 billion, YouTube 2.2 billion, WhatsApp 2 billion, Instagram 2 billion, WeChat 1.26 billion, and TikTok 1 billion MAUs -- all as reported by Buffer.

There’s no doubt that this audience is the result of the protections given to the networks by a law called Section 230. This law has shaped the modern Internet and now is poised to reshape it.

If Section 230 is removed, there will be one person we can hold responsible: Elon Musk.

The thinking back in 1996, when it was enacted, was that without Section 230’s legal protections, platforms would face large legal expenses that would have slowed the growth of the internet. In fact, section 230 has been called the 26 words that “created the internet.”  Says the law: “No provider or user of an interactive computer service shall be treated as the publisher or speaker of any information provided by another information content provider.”

Section 230 does have limits on its legal shield. Platforms are liable for violating federal law, and for violating federal or state sex-trafficking laws. But right now, if you think you’ve been defamed by a post on Facebook, or injured by a tweet, you’ll find it impossible to sue the platforms for damages.

Damages. Money. Restitution. Right now, the platforms have it, and damaged individuals can’t get at it.

But Musk is poised to change that.

It’s important to recognize that almost the only thing that Democrats and Republicans agree on is that Section 230 needs to change or be removed. Joe Biden’s presidential platform included that promise.

Enter Elon Musk, who has made it clear that he wants Twitter to be committed to free speech. Musk at a TED conversation last month promised that he was “100% committed to truth.” And that Twitter needs to be an open-source platform and “there should be no behind the scenes manipulation, either algorithmically or manually.”

Let’s set aside for a moment the natural conflict between free speech, as Musk defines it, and “truth." It seems as if Musk wants to unilaterally allow people to be free to say things on Twitter that are provably untrue, even dangerous. But for the purposes of the future of Section 230, it hardly matters.

NYU professor and podcaster Vasant Dhar sees Musk’s arrival as the lubricant that could move the 230 debate from indecision to action.

Said Dhar in an op-ed in The Hill: “For many years, I have similarly argued that algorithmic transparency of social media platforms is a necessary requirement for trust. Regulation is needed because social media platforms have become the de facto public square. Former President Obama noted in 2017 that we needed to ‘have a conversation about their business model that recognizes they are a public good as well as a commercial enterprise.’”

Dhar makes a cogent argument, in many ways much more so than Musk. Says Dhar, “I proposed that the ‘objective functions’ underlying their algorithms be made visible to the public, and a transparent policy implemented for censoring content and users that include warnings and appeals. Making the rules transparent would eliminate errors of incorrectly suppressing or amplifying content that is okay, and not banning content that is not okay.”

What Musk seems to be proposing is policies that are open-sourced, and that changes would all be stored in blockchain records that would make decisions transparent -- algorithmic transparency, in Dhar’s words.

But the revocation of section 230 comes with inherent risks. If citizens are freed to be able to look to the courts for redress of injuries committed by platforms, one of the natural first recipients of claims would be Musk himself, as the soon to be the private owner of a platform well known for publishing private, injurious, and some would say libelous material. Musk’s wealth makes him an attractive target. But other critical internet resources would face the same legal exposure. Wikipedia, for example, which now enjoys the same protections as Facebook and YouTube, would find itself the target of an endless array of institutions, people, and claimants.

Wikipedia lists claims against the platform here, suggesting that most of the claims were dismissed as a result of Section 230.

“[If we were to] live in a world where there is no Section 230 in the United States, that changes things drastically,” Sherwin Siy, the Wikimedia Foundation’s senior manager for public policy, reported in Digital Trends. “It makes it a very different landscape. You’d see a lot of platforms being much more hesitant to allow users to publish things without any vetting. It would expose, for example, the Wikimedia Foundation to a lot more potential liability. It actually would just be a punishing amount of risk.”

All changes in law have consequences, some anticipated, others not. With Section 230 on the chopping block, and Musk sure to tweet things that will taunt legislators into action, the freedom of the internet, and the current mess of the public square, seem poised for inevitable change.