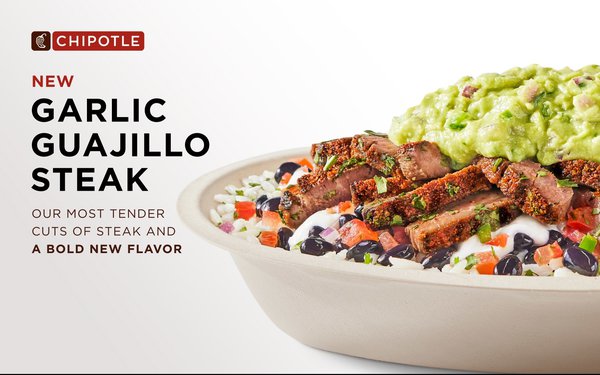 On the heels of another impressive financial quarter, Chipotle is cooking up plenty of new ideas. It's testing a new Garlic Guajillo Steak at more than 100 restaurants and running a no-delivery fee promotion to celebrate Cinco de Mayo. And the company's chief executive says the chain, beloved by customers for its "Food with Integrity" positioning, is experimenting with dessert items.

The Newport Beach, California, company says first-quarter revenue climbed 16% to $2 billion, with comparable restaurant sales rising 9%. It opened 51 new restaurants in that period, with 42 locations equipped with a Chipotlane drive-through.

And while its in-restaurant sales jumped 33.1%, digital strength is still impressive, now representing close to 42% of revenue. Its loyalty program now boasts 28 million members, who account for about 70% of digital sales.

Chipotle anticipates an even better growth rate for the coming quarter, expecting comparable restaurant sales growth of between 10 and 12%.

In a conference call announcing those results, CEO Brian Niccol got investors salivating over new dessert possibilities as the type of "add on" offer that would boost order revenue, reports CNN. In the past, Chipotle has experimented with buñuelos, a crispy, cinnamony dessert with a chocolate dipping sauce, a Mexican chocolate shake, and churros.

The quarterly financial report met Wall Street expectations, even as inflation makes operating costs challenging for restaurants. Revenue came in ahead of forecasts, with a 5% increase in transactions. "We remain confident that Chipotle has the drivers in place to fuel strong relative performance in upcoming quarters," writes David Tarantino, who follows the company for Baird. He cites its effective marketing, new products and ongoing digital muscle.

Sean Dunlop, who follows the chain for Morningstar, writes he is especially encouraged by the company's popularity in smaller cities and its Chipotlane units.

And while he sees continued pressure from the industry's big challenges, including rising labor costs and food prices, "we view Chipotle, between its high average unit volumes, strong peak hour transaction capacity, and competitive pricing, to count itself among one of the best-positioned operators to navigate short-term risks," he writes.

"In our view, the company has carved out an enduring niche in the U.S. restaurant landscape, with competitive menu prices, extreme convenience, and 'food with integrity' [positioning] allowing the firm to lure away customers from both casual dining and traditional fast-food competitors."

Separately, to celebrate National Nurses Day, Chipotle promises 2,000 medical professionals free Chipotle for a year, equivalent to more than $1 million in free food. It's the most awarded to the "free Chipotle for a year" program. Customers can nominate a worthy provider using hashtags on social media. And its designating proceeds from its digital "round up" offers to the American Nurses Foundation. Last year, it gave away 250,000 burritos to healthcare workers.