Forget Digital Vs. Print -- This Media Startup Lives Only In The Metaverse 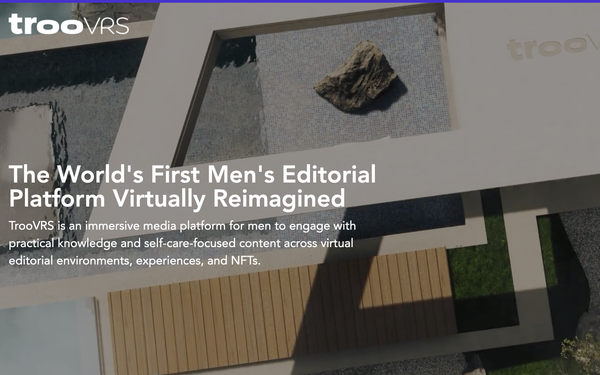 The startup publisher Troo Media this week launched what it describes as the first editorial platform built for the metaverse: a brand called TrooVRS, which delivers content focused on self-care for modern male audiences.

The new brand was previewed at Cannes Lions, the festival in Cannes, France, that celebrates creativity in the field of branded communications.

Content will target the interests and needs of men from all backgrounds, featuring topics like relationships, work, and physical and mental health.

The launch of TrooVRS coincides with Men’s Health Month in June, a designation established by Congress in 1994 and sponsored by the Men’s Health Network, a consortium of health organizations.

Accordingly, TrooVRS seeks to serve as a voice of awareness for men’s health and encourage positive living choices. The company will recruit writers and content creators from across the globe who represent a diverse set of ethnicities, nationalities, and perspectives.

But it’s perhaps most noteworthy because it exists solely in a virtual world. TrooVRS employs immersive, VR-powered environments to deliver content and experiences in written, video, and audio-based formats.

its first virtual world is a remote Scandinavian-inspired home built directly into a mountainside. It’s accessible today for brands and agencies to begin creating customized experiences on the platform, such as presentations, tutorials and demos in relevant environments like stages, kitchens, gyms, showrooms and more.

Troo Media, founded this year, is based in Miami and San Francisco.

“While new media companies are emerging to connect with an increasingly diverse spectrum of audiences, we have seen very little in terms of platforms that reflect the modern values and ideals of men, which now cover a vast range of identities, interests and aspirations,” Whant, who’s the CEO, said in a press release. “The metaverse presents us with an opportunity to deliver content in a more immersive, intimate and effective environment, and its inherent decentralization will allow for the amplification of and participation from audiences that have been historically shut out [of] traditional media formats."

The virtual worlds on the trooVRS platform are designed by SPINE, an interactive media and 3D visualization studio based in Doral, Florida.