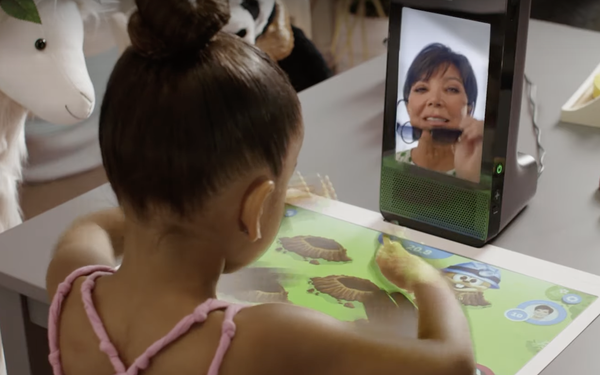 As Amazon rolls out its Prime Day deals, the company has introduced Glow, an interactive video call and projector device, which is now selling for $150, 55% off its normal price.

The device allows kids to play games while chatting with loved ones. To demonstrate how it works, Amazon has rolled out an ad featuring Kardashian mom Kris Jenner, using Glow to talk to granddaughter Dream West. In the ad, Jenner thanks Dream for “squeezing me in this morning,” as the two converse via a tablet and a PC.

When Jenner asks what’s on the agenda, Dream says she wants to play Memory Match. The two play and then Jenner passes on her grandmotherly wisdom: “Number one: Always look at the world through rose-colored glasses. Number two: A positive attitude is everything.”

Jenner then tells Dream that getting to spend time with her is the secret to her glow. The ad ends with an invitation to “Get your glow on.”

In a world saturated by the Kardashians, this ad shows a softer side of the family that should rub off on Amazon and Glow.