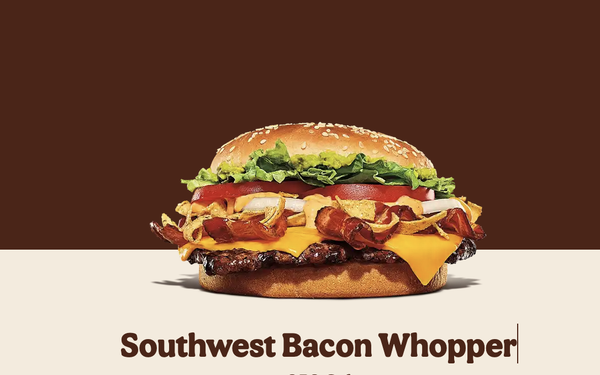 Burger King has fallen on hard times recently. In 2021, the chain was No. 7 in Technomic’s list of the Top 500 fast-food chains, behind Dunkin’, Wendy’s, Taco Bell, Chick Fil-A, Starbucks and McDonald’s. As The Street recently lamented, “That’s a humiliating fall from grace” for the brand that was once “clearly the Pepsi to McDonald’s Coke.”

The Takeout reviewed the Southwest Bacon Whopper and found it to be “a winning combination of flavors” singling out its avocado spread as “the best topping of all.” Stillthe review came down on the “disappointing protein” of the beef patty.

That launch came after BK’s Whopper Melts, which was a combination of the Whopper and the classic patty melt, which BK took nationwide in the spring. Some customers were surprised  that the Whopper Melts were smaller than the Whopper.

BK is currently willing to try anything. For instance, BK Canada last year introduced the Franken Whopper, which included a layer of onion rings and french fries on top of the usual Whopper.