Carl Sagan And The Dumbing Down Of America 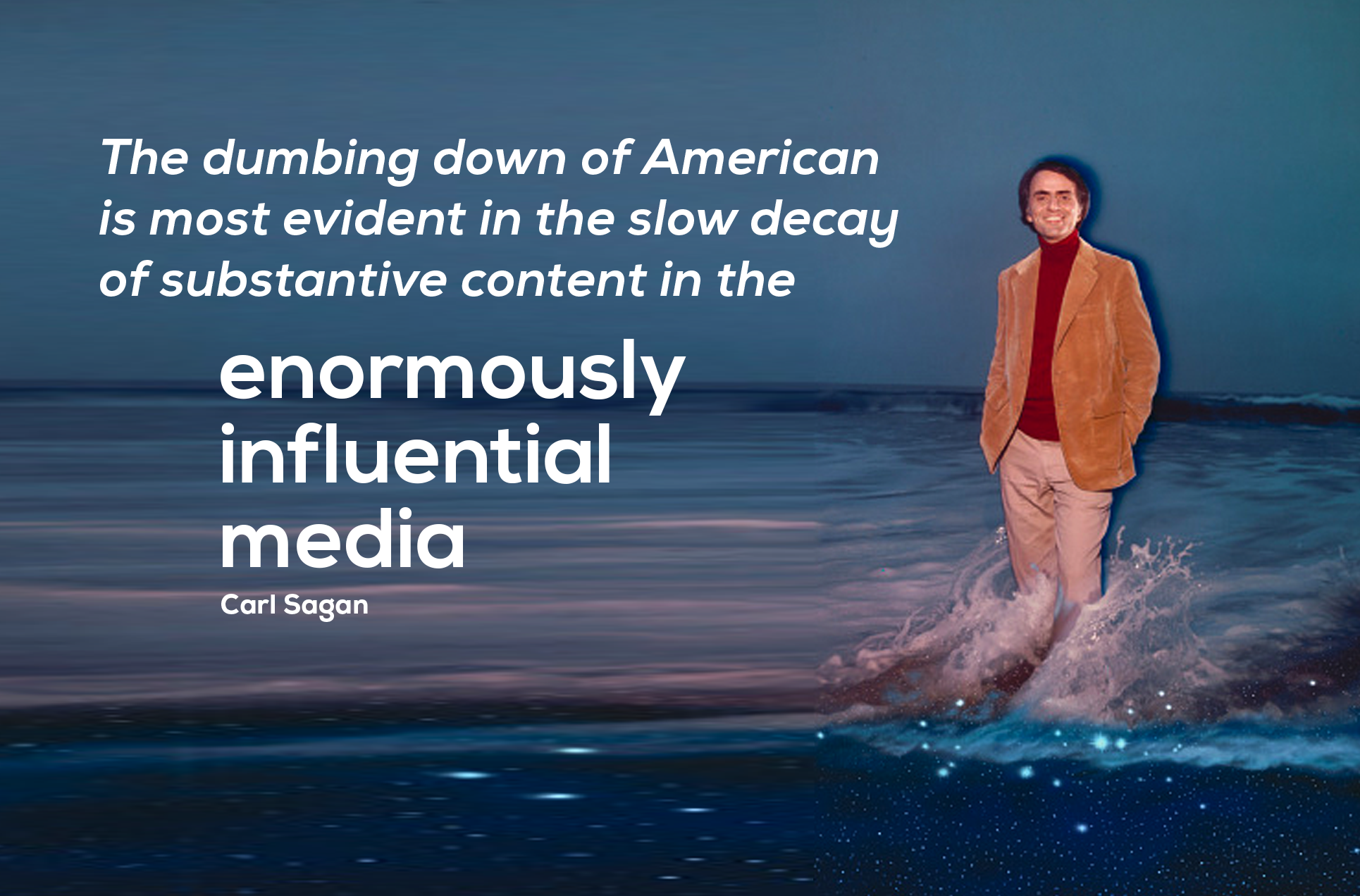 Carl Sagan’s remarkable life as an astronomer, planetary scientist, cosmologist, astrophysicist, astrobiologist, and author made him uniquely suited to ask complicated questions. At the University of Chicago in the 1950s, the-then 16-year-old Sagan took courses in philosophy, science, and literature. He was among many things, a deep thinker.

In his 1995 book “The Demon-Haunted World,” Sagan penned these words: “I have a foreboding of an America in my children's or grandchildren's time -- when the United States is a service and information economy; when nearly all the manufacturing industries have slipped away to other countries; when awesome technological powers are in the hands of a very few, and no one representing the public interest can even grasp the issues; when the people have lost the ability to set their own agendas or knowledgeably question those in authority; when, clutching our crystals and nervously consulting our horoscopes, our critical faculties in decline, unable to distinguish between what feels good and what's true, we slide, almost without noticing, back into superstition and darkness.”

In 1995 Bill Clinton was president, and the so-called internet age began. The future that Sagan feared hadn’t manifested any of its now-powerful forces. There was no Facebook, no 4Chan, no iPhone.

Sagan continued: “The dumbing down of American is most evident in the slow decay of substantive content in the enormously influential media, the 30 second sound bites (now down to 10 seconds or less), lowest common denominator programming, credulous presentations on pseudoscience and superstition, but especially a kind of celebration of ignorance.”

In 2011, New York Times op-ed columnist Ezra Klein loved the internet, as he noted in his Aug. 7, 2022 column: “I am of the generation old enough to remember a time before cyberspace but young enough to have grown up a digital native. And I adored my new land. The endless expanses of information, the people you met as avatars but cared for as humans, the sense that the mind’s reach could be limitless.”

I was in sync with Klein’s feelings back then, that the internet promised to expand and amplify all the things I thought mattered most in the world. It was a magic web of connected devices that would surely make the world a better place. I hadn’t read Sagan’s quote then, and presumably neither had Klein.

As he noted in his op-ed column, in 2020, Klein read Nicolas Carr’s book “The Shallows.” Carr wrote: “The very way my brain worked seemed to be changing. It was then that I began worrying about my inability to pay attention to one thing for more than a couple of minutes. At first, I’d figured that the problem was a symptom of middle-age mind rot. But my brain, I realized, wasn’t just drifting. It was hungry. It was demanding to be fed the way the Net fed it — and the more it was fed, the hungrier it became.”

Today we’re waking up to the bleak reality that this new world we’ve built is more able to amplify hate and division than it is to share knowledge and understanding. There’s a reasonable debate to be had as to whether the nature of the internet itself is biased in favor of short, context-free blips of content, or if the economic and driven system that supports it is biased in favor of pablum. TikTok’s rapid rise should be a harbinger of things to come: shorter, faster, and algorithmically deployed to serve our most simplistic needs -- hate, violence, fear.

“Attention is contagious,” writes Klein, crediting visual artist and author Jenny Odell with the concept. So today the web is contagious? Or is it addictive? Neuroscientist Uri Hasson says the social platforms are a drug, and the owners are drug dealers. As a scientist, he feels no need to research this fact - he’s confident that the volumes of research come to an undeniable conclusion: We’re addicted. Our hunger for connection, approval, and acceptance replaces our social selves with a machine-driven thrum that drives digital needs. Esther Dyson says, “what addiction is about is the desire for more and the release that it gives you, but then more is never enough."

Sagan’s foreboding foretold this moment. We’ve built a machine that X-rays our brain, discovers our simplest needs, and then feeds them back to us in an endless loop of dopamine.

The algorithms that are driving this trend were created by humans, programmed by humans, and owned by humans -- who are no longer in control. So Klein ends up asking the right question, first crediting John M. Culkin:  “We shape our tools, and thereafter, they shape us.” And then, says Klein: “How do we want to be shaped? Who do we want to become?”

That is indeed the question of our time.

Correction: A “Media Insider” commentary published July 25 (“The Moonies And Their Media”) incorrectly stated several facts, including that the Unification Church owns International Business Times or any of its current or past properties, including Newsweek. The column has been removed.

1 comment about "Carl Sagan And The Dumbing Down Of America".
Check to receive email when comments are posted.
Next story loading