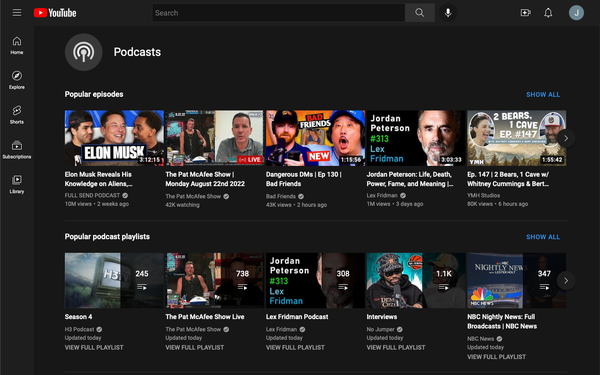 Google has been quietly testing a YouTube podcast site.

The new site, which is separate from Google Podcasts, for now has an extremely low profile, and lacks official branding.

“Instead, it is more of a simple sub-page for YouTube itself, without an explicit mention that it’s supposed to be something else,” reports 9to5 Google writes. “This could change as the service is rolled out, but for now, the experience is as rudimentary as it can get.”

The site focuses on video formats, showcasing popular podcasts or podcast-adjacent content on the video platform, per the report.

Although some would-be listeners received a 404 error message, Publishers Daily was able to click through to www.youtube.com/podcasts and see a listing of podcasts that also feature video.

“YouTube is to feature audio ads: both sold by Google but also by partners too, if they’re large enough,” PodNews wrote in March, before the site was live. “YouTube’s standard practice has been to share revenue with publishers, so we might expect, perhaps, revenue to be shared for podcast publishers as well.”