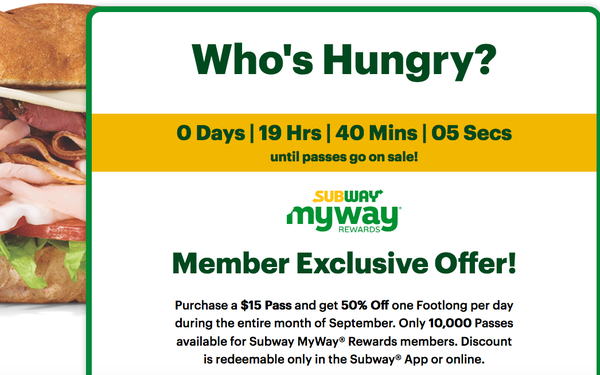 As fast feeders grapple with inflation, Subway is planning to launch its first sandwich subscription, which will halve prices in September.

The $15 “Footlong Pass” subscription offers 50% off a footlong sandwich each day when ordered on Subway’s app or website with daily digital codes. The deal is for all of September.

Only 10,000 passes go on sale on Aug. 24, available solely to Subway MyWay Rewards members. Subway prices vary by price and location, but in some cases, a sub will sell for less than $5.

The deal is similar to others launched by fast feeders. For instance, Olive Garden’s “Never-ending pasta bowl” has been offered over the years since 1995. Taco Bell’s Taco Lovers Pass offered one of seven tacos, like the Crunchy Taco or Doritos Locos Tacos, a day for 30 days. That offer was launched in January and pulled a few months later.

In QSRMagazine’s 2021 report on the top 50 fast-food chains, only two of the top 10—McDonald’s and Subway—saw their unit count drop, while the other eight added units. Subway shut 1,043 more outlets than it opened in 2021, according to public filings in April.

In 2015 Subway was hit by the fall of its spokesman, Jared Fogel, who pleaded guilty to 12 counts of producing child pornography and one count of distributing it.

In 2021, Subway announced sales for its restaurants were the strongest since 2013. That came after Subway revamped its menu with new versions of its sandwich bread and new toppings, such as smashed avocado. But industry experts attributed the gains to price inflation and said the chain continued to lag the competition.