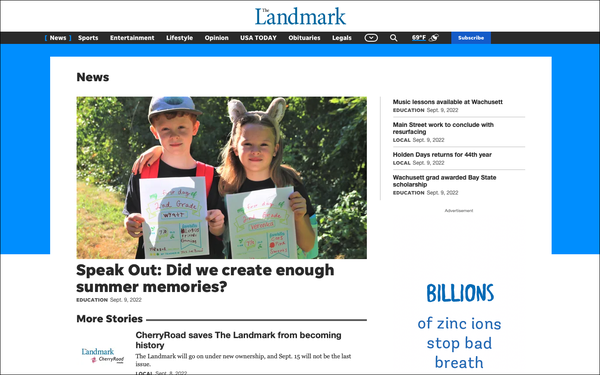 An apparent plan by Gannett to shutter The Landmark, of Holden, Massachusetts and three other local newspapers has been cancelled.

The paper is being acquired, along with The Leominster Champion, The Millbury-Sutton Chronicle and The Grafton News, by CherryRoad Media in a deal that should close this week.

“When we heard about the potential closure of The Landmark, The Grafton News, the Millbury-Sutton Chronicle, and the Leominster Champion, we reached out to Gannett to see if they could be saved," said Jeremy Gulban, CEO of CherryRoad Technologies and CherryRoad Media.

Gulban adds, “We are excited to engage with Gannett to enable the continued operations of these newspapers as part of CherryRoad’s growing family of community newspapers.”

CherryRoad Media will own 71 newspapers in 12 states with this purchase and that of three Michigan weeklies recently.

It is also acquiring The Chronicle-Express of Pan Yan, New York, which was also headed for closure. The paper wrote last week that it will "continue publishing local news as it and predecessor newspapers have for 198 years."

In comments on the CherryRoad website, Gulban states, “This is one of our ways to give back to our community by acquiring media houses that add so much value to our daily lives but are suffering the brunt of digital age by losing subscriptions.”

Gulban continues, “CherryRoad has a successful track record of enabling technologies that play an important role in the ‘digital fabric’ of the community and we will use this acumen to enhance the online experience of these media assets.”

CherryRoad  Technologies, which offers technology solutions such as cloud hosting and other network systems, was started by Gulban’s father in 1983. Jeremy Gulban reportedly took over in 2008.

These are happy outcomes for Gannett staffers compared to the recent layoffs of roughly 400 newsroom  employees.