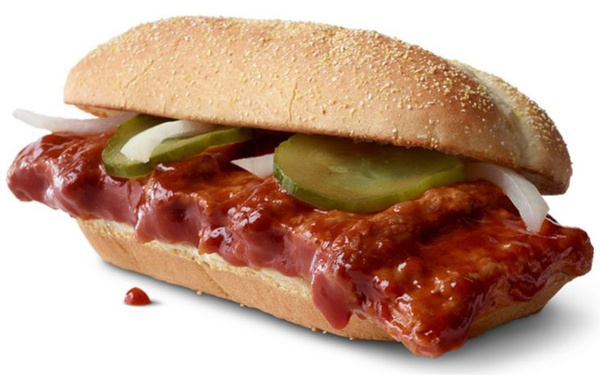 McDonald’s has brought back the McRib sandwich, though it’s not clear if this is its final appearance.

“Get one while you can because this is the McRib Farewell Tour,” the McDonald’s site says.“Enjoy our famous pork sandwich as if it’s your last.” The site states that 11/20/22 will be the date on which customers can say goodbye.

The sandwich is set to debut on Oct. 31, McDonald’s said on its Facebook page.

The McRib got its start in Kansas City, Kansas in 1980, but was not an immediate hit. In fact, it was pulled from menus in 1985 because of poor sales. McDonald’s brought back the sandwich again in 1994 when the motion picture “The Flintstones” hit theaters.

After 2005, the sandwich popped up for a limited time only and McDonald’s put on a “McRib Farewell Tour” in 2005, though the chain repeated the tour every year for the next three years.

McDonald’s has periodically resurfaced the McRib in recent years. It exhumed McRib in 2012, brought it back in 2017, and then resurrected the McRib last year for its 40th anniversary.

As for whether we’ll be seeing the McRib in 2023, McDonald’s was coy. “Like any true farewell tour, we’re hoping this isn’t a ‘goodbye’ but a ‘see you later,’” McDonald’s wrote in a press release. “Because as our McRib stans have experienced time and time again: you never know when -- or if -- the McRib is coming back.”